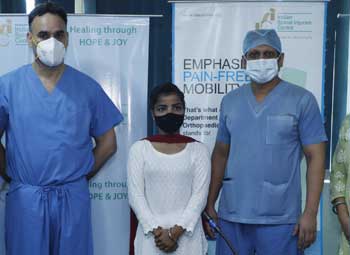 22-year-old Suman (name changed) was heartbroken after several rejected proposals for her marriage due to her deformed knees. Coming from a modest background, surgery was ruled out by her parents until they were routed to the Indian Spinal Injuries Centre (ISIC), New Delhi by neighbours where doctors modified the standard surgical procedure to correct the bone deformity, reduce cost, visible scar and hospitalisation, and faster recovery. After 4 months of the surgery, she was married last month to a man she chose to be with.

Doctors say they modified a prevalent surgical process, medically known as supracondylar osteotomy, to correct knock knees (genu valgum). The modified process is cost-effective, does not require implants, corrects the deformity completely without a visible scar, and allows return to complete range of motion and function within 3 months and avoids second surgery for implant removal. In the past one year, doctors at the Indian Spinal Injuries Centre (ISIC), New Delhi operated on 10 girls in the age group of 16 to 22 years – 08 girls had deformity in both the knees while the rest had deformity in one knee.

“The patients developed the deformity due to rickets or idiopathic (unknown) reasons. Since post-operative scar was a concern among their parents, we modified the process to reduce the size of the incision – it is only 5 cm as compared to 25 cm in the main surgery. Besides, we made the incision near the upper fold of the knee, at inner thigh which helped in reducing the visibility of the scar as well as minimal blood loss. Through this small incision “V” shape osteotomy (cutting and reshaping of bones) is done at the junction of metaphysis and diaphysis (lower end of thigh bone), and deformity corrected. It’s an inherently stable osteotomy so does not require fixation with an implant. A plaster of Paris cast was used to stabilise the leg and promote bone healing instead of using a plate. This also cut the cost of the surgery, making it affordable to a large number of people in weaker socio-economic conditions. Besides, the process can be performed at one go, without any need for a second surgery for readjustments and implant removal and lessen the duration of hospital days. Correcting knock knees can bring substantial improvement in quality of life – it corrects gait and brings stability to the body, reduces their chance of getting injuries, degenerative diseases, problems with joint, and improves appearance. All the patients can resume normal life as soon as they start getting back their mobility,” says Dr Surbhit Rastogi, Associate Consultant Orthopedics, Indian Spinal Injuries Centre, New Delhi.

Knock knees is prevalent in malnourished children and can be caused by rickets (Vitamin D deficiency, especially in these COVID times when children are not encouraged to play outside in sunlight), an injury or infection affecting the knees or leg bones, or genetic conditions that affect the development of the bones or joints.

“Genu valgum can be corrected by the surgery but it requires a specialised team and advanced equipment. This adds to the cost of surgery and requires deft surgeons. Both the factors were done away with during the modified supracondylar osteotomy at the hospital, making it highly adaptable in healthcare facilities with basic set-ups. It also speeds up the recovery as the body is using natural components instead of a metal implant. We are very satisfied with the outcome and the way it has been helpful in the prevailing socio-cultural conditions of our patients,” says Dr. Deepak Raina, Sr. Consultant and Chief of Hip Service, Indian Spinal Injuries Centre, New Delhi.

“I am proud of the highly-skilled doctors at our hospital who have made this extra effort to enhance the outcome of a surgical process by simplifying it to an extent that it no longer requires any specialized set up, except for a skilled surgeon. We are hopeful that this surgical process may be practiced even in frugally-equipped rural health set-ups so that people can get help closer home and need not travel to cities for such health conditions,” says Sugandh Ahluwalia, Chief of Strategy, Indian Spinal Injuries Centre, New Delhi.

Aadhaar News : Aadhaar has played a crucial role once again in uniting the lost member of a family