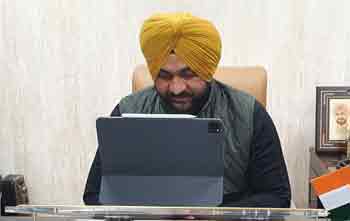 On the occasion, Mr. Sandeep Singh said that Guru Gobind Singh had sacrificed his entire family in the face of militant forces. No one has made a greater sacrifice than the Guru, he added. He said that following the Guru’s ideals, the Sikh community is working all over the world to serve humanity and protect the oppressed and the weak.

He said that it is very important to introduce our future generations to their glorious history. Therefore, educational institutions must make students aware of the history of great men in addition to the curriculum so that an army of brave and serving youths can be raised all over the world. On this occasion, the Mr. Sandeep Singh called upon the Sangat to ensure that their children visit this holy place as well.

Mr. Sandeep Singh said that it is commendable that the Central Government has decided to celebrate the 400th Prakash Parv of Hind Ki Chadar Guru Tegh Bahadur Sahib Ji Maharaj internationally. A committee of dignitaries from across the country has been constituted under the chairmanship of Prime Minister, Mr. Narendra Modi for the programmes to be held during the event, in which he too has been entrusted with the responsibility of participating in the event as a committee member, he added. He said that the Prime Minister’s effort will be to make this programme a global event.

It is noteworthy that Gurudwara Takhat Shri Harimandir Ji Patna Sahib is the historic city where the 10th Guru Gobind Singh ji was born. Here the memories associated with Guru Sahib’s childhood are cherished by the Sikh community.

Pundri will be given the status of a sub-division