She has to face the struggles, just like others

At India Today Conclave East 2018, actresses Moonmoon Sen and Koel Mallick open up about films, being in a starry family, nepotism and the growing #MeToo Movement.

Koel Mallick: In the beginning, everyone was happy that I had entered the film world. As people loved Baba (veteran Bengali actor Ranjit Mallick) so much, the affection naturally passed through. I didn't feel pressure, I felt a sense of responsibility. It was a responsibility that I had to take forward. Initially, I was just Ranjit Mallick's daughter to most, but now I have made a mark.

Koel: Fortunately, I didn't have to face harassment, probably because our industry is well-cushioned, and I was also a veteran actor's daughter. I'm sad to hear such instances, but I'm glad that women are speaking about their experiences now. Baba had a long conversation with me before I entered the film industry. So hence, I was well-prepared as I had Baba's guidance in mind. I knew how my conduct would be. It's important to have such a moment with your parents.

Moonmoon- Since time immemorial, women have been abused in various forms, be it verbal accusations, or an arm around the waist, or a laugh. Sometimes out of politeness, you can't reply. This abuse has always been there.

Koel: I didn't know that an actor could be chucked out, even after the first days of work. When I was shooting for my first film, my father told my director to chuck me out of the film, if he felt that I wasn't doing well. He said, "It's her journey, and she has to face the struggles, just like others." This helped me and earn my respect on my own terms.

Moonmoon: I was thrown out of a film, because someone more famous got the role. I cried all night. So when my daughters came to me, I was able to tell them, "Don't worry. It's happened to me, but you'll survive it." And it's true. You survive it. It's a glamorous, but a painful profession.

Koel: Never been trolled. But when people get trolled, it's best to avoid it. You don't want to waste time on people who troll you. Smile, go forward and don't give attention to them.

Koel: Destiny has to call me that side too. I have been getting offers for the last few years but then at times directors, dates, something or the other goes wrong.

ON BEING A MARRIED ACTRESS

Koel: I was always told that my glam quotient would reduce after marriage. There was one thing in my mind- if it does fall, it does. It's immaterial.

When I got married most of my films were blockbusters. Being married doesn't stop you from getting films. One example is Suchitra Sen. When she entered the industry she was married woman and a mother. Marital status doesn't make any change.

Moonmoon: There is nothing wrong. It doesn't take away anything from the actress. 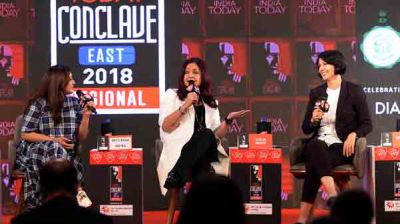 I detest that people are silencing her