Pracheen Kala Kendra, Chandigarh, the premier organization dedicated to the promotion, preservation and dissemination of Indian classical art and culture with a Pan- India witness an 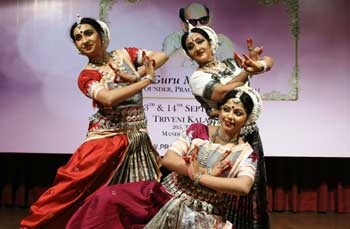 soothing sitar  recital by prominent Sitar player Subrata De and a melodious Dhrupad recital by Mallick Bandhus at Triveni Kala Sangam Auditorium , here on first Day. After a marvellous display of Sitar and Dhrupad singing on the first day, the concluding day of the two day grand Guru M L Koser Music and Dance Festival showcased renowned Flute exponent Pt Chetan Joshi ji's flute recital which was followed by a gorgeous display of aesthetics in the form of Odissi Dance by senior disciples of and Vidushi Jyoti Srivastava herself.

Subrata De is the most promising name in Sitar today. A sitarist from Bishnupur Gharana, Mr. De has not only earned his reputation as a performer, but as a cultural ambassador of India, propagating Indian culture in its purest form all over the world. He also works for cultural exchanges between India and foreign countries through concerts, lecture demonstrations and facilitating exchange programmes. Subrata De learned sitar at the tender age of seven under the guidance of Shri. Amarjeet Singh of Jamshedpur. Later, he trained under late Suramani Bauri Bandhu Sethi of Bhubaneswar where he imbibed the essential elements of sitar. Subsequently, after 10 years of practice, he placed himself in the hands of sitar maestro Pandit Manilal Nag of Bishnupur Gharana.  Subrata De has been awarded  Sangeet Bhaskar by Pracheen Kala Kendra, Chandigarh. Additionally, he has received the National Scholarship from the Ministry of Human Resource Development of the Government of India.

On other hand, Prashant and Nishant Mallick belong to the illustrious music family of Darbhanga Gharana which is more than 450 years old music tradition and they represent the unbroken 13th generation of this musical lineage that has produced many musical masters. Their training in Dhrupad music started at an early age under the tutelage of their father Pt. Prem Kumar Mallick, later, they also had the privilege to learn the core of Dhrupad gayaki from their grandfather Dhrupad legend, Pandit Vidur Mallick.  The Mallick Brothers are listed among the finest Dhrupad vocalists in the field of Hindustani Vocal. With the soulful voice and powerful singing style they have developed into artists of great maturity and are considered to be one of the torchbearers of the new generation in the field of Dhrupad music. Mallick Brothers are an “A” Grade artist of Dhrupad music of All India Radio and Doordarshan; They have successfully performed at many prestigious music festivals all over India and abroad including

Sitar exponent Subrata De   begin this programme and he chose Charukeshi through an alaap followed by Vilambit Teen Taal, Madhya laya char taal ki sawari set to 11 matra cycle and drut teen taal to unfold the mysteries of  raga with maturity and perfect expansion. Subrata captivated the audience with his pure skill, deft handling of the raga, lightening speed of Taans. He concluded his recital with captivating Dhun set to Raga Mishra pilu amidst thunderous applause. Tabla exponent Ustad Akram Khan added success to the concert.

After  Subrata’s scintillating performance Mallick Brothers took the centre stage to present soulful Jugalbandi  . Duo chose raga “ Bageshri” through an elaborate alaap besides the jod alaap and a crisp jhalla. Then they moved on to present char taal ki bandish  with bols “Tum ho Karuna Nidhan” wich was well received by the audience. The duo concluded the recital with a Famous Kabir Padas studded with bols “kuch lena na dena magan rehna”   set to tevra tal amidst repeated applause. They were very ably accompanied by young and talented Pakhawaj exponent “ Gaurav Shankar Upadhyay.

Second Day  evening started with Pt Chetan Joshi ji's memorable performance of Raag Gorakh Kalyan, which he preferred to call only Gorakh, as Kalyan had not much to do in it, unlike what the name suggests. In a traditional format consisting of Alaap Jod and Jhala, and then a vilambit rupak taal composition, Chetan ji enthralled the audience with his rare use of Nishad and touched the hearts of every audience member of the jam-packed auditorium. His use of Mandhra Saptak and tonality almost reached the heights of perfection during the performance. His recital was enriched by an apt and mood-setting tabla accompaniment by senior Tabla maestro of Benaras Gharana Pt Ram Kumar Mishra. Pt Joshi, a disciple of legendary Pt Bholanath Prasanna, continued his recital with a madhyalaya composition set to tintaal. As the evening progressed, he continued to win the hearts of the audience with his intricate layakari and adept musical journey. He completed his recital with a famous Bengali style Bhatiyali piece, a popular folk form of the music of seamen of Bengal.

The auditorium was eagerly waiting for the following recital and not a single member moved from their place. And to much of their delight, Vidushi Jyoti Srivastava took on the stage and earned a lot of applause and support through her opening piece of Saraswati Mangalacharan, where the virtuoso danseuse paid tribute to goddess Saraswati. Following this opening act, her disciples Shaily Chatterjee and isha Das took to the stage along with their guru Jyoti Srivastava ji and presented a series of presentations including Barasa Ullas, or the celebration of Rains, An Ashtapadi, invoking divinity through their dance. The live music by talented and experienced musicians enlightened the evening even more. The lightings and the whole art that follows it on stage enriched the whole experience of the dance performance. The presentations ended with a piece called 'Moksha' which was accompanied by Sufi Music. The whole ambience of Sufi music and Odissi Dance made it distinct and new, making it icing on a cake for the audience.