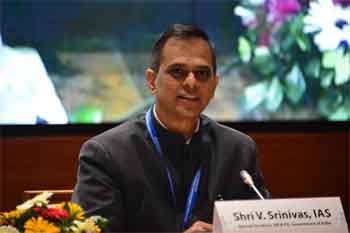 Department of Administrative Reforms and Public Grievances, Government of India (DARPG), in collaboration with Indian Institute of Technology Madras organized a three-day symposium on ‘Imagining India @2047 through innovation’ between 7th and 9th March 2022 at IIT Madras Research Park (IITMRP), Chennai. 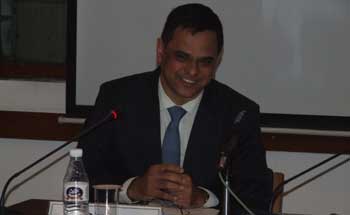 This Symposium was organized to bring together pioneering minds in the country across the diaspora of academia, Government, and entrepreneurs to evolve a ‘Vision 2047,’ marking India’s 100th year of independence. DARPG and IITM selected around young officers working as Deputy Secretaries of Government of India, District Collectors who will be serving in 2047 and Young entrepreneurs will have teamed together to collectively brainstorm innovative solutions for benefits of the citizens.

Around 300 participants from all over India including Principal Secretaries (AR) of all States and all ATI’s joined the inaugural session.

Mr. V Srinivas, Secretary, Department of Administrative Reforms & Public Grievances (DARPG) said, “I look forward to reading the findings on the roadmap forward for India’s governance models. Bringing Citizens and Government closer using technology is an apt description of the Vision India@2047 and I thank those who strived tirelessly to ensure that one of the largest conferences bringing together young civil servants- young academia and young entrepreneurs became a reality.

Under the overarching themes of ‘Research and Development,’ and ‘Innovation and Digital Governance,’ the following ten key areas are being explored across the ongoing three-day symposium:

India has a time-tested administrative system with adherence to rules and established norms, an elaborate structure and procedures for carrying out functions of Nation Building and creation of an inclusive State. There are also empowered Commissions, statutory boards and autonomous societies where significant institutional capacities exist. The permanent civil service has contributed significantly to continuity and enabled evolution of institutions. The principle of subsidiarity has been followed to decentralize functions to State and Local Governments. The Union Government has primarily focused on core areas of defence, international relations, national security, education, health, infrastructure, social security and social justice, macroeconomic management and national policy making. Policy Analysis remains a critical function of the central secretariat given the imperative of providing high quality policy advise to the apex levels in government. The Central Secretariat Manual of Office Procedures has been recast to provide for a detailed delegation to all functional levels to minimize delays in processing of receipts.

He stated that the consensus amongst the sector specialists was that technology will play a critical part in the futuristic governance models of India redefining citizen and government relations where technology is an enabler and citizen is the master. Governance would also be data driven in which evidence based futuristic indices for benchmarking governance would be drawn up. Further there was a lot of emphasis on the foundational and non-negotiable values of ethics and integrity – a quest for Naitik Bharat. The importance of incorporating management practices into 21st century governance was discussed, and one of the interesting proposals was to setup interactions between 100 startup innovators from private sector with 100 innovators in government. Building digital institutions by use of blockchain, designing projects for innovations at district level were also discussed. An inclusive internet ecosystem with thousands of citizen centric services using 6G technology with assured connectivity and speed is to be developed. Digital technology has brought scale and size to India’s governance models and in the coming years this will be enhanced. Real time delivery of services and doorstep delivery of services are parts of modern day governance lexicon. Bringing Citizens and Government closer using technology is an apt description of the Vision India@2047. Significant benefits of disruptive technologies have been witnessed in Governance. Blockchain and distributed ledger, 3D printing, advanced materials and nanomaterials, energy capture storage and transmission, artificial intelligence and machine learning have been adopted into governance. These are included in the 10 theme areas identified for the Conference.

Professor V Kamakoti, Director of IIT Madras said, “With the support from DARPG, we have had a great beginning to this Symposium.  Policy ecosystem – from conceiving stage to implementation involves academia, industry, and bureaucracy. This symposium has brought together these three who potentially will be the stakeholders of many crucial policies of our country in 2047.  Having so many great, enterprising and yet such diverse minds across the country coming together to collaboratively brainstorm innovative solutions for India is nothing short of visionary! This makes for a very promising stride ahead towards our Vision of imagining India in 2047 and we look ahead to the possibilities that will evolve from this novel Symposium.”

Each day of the Symposium features presentations by senior faculty and entrepreneurs to help evolve the Vision 2047 under each key theme. Thematic presentations will be prepared as an outcome of the interactions within the forty cohorts aptly termed as ‘nucleus.’

“ India is a very young country with half its population below 25 years in age. On the one hand it is a great advantage but on other hand it can also lead to massive unemployment and poverty. These are the challenges that we need to overcome in next 25 years as our GDP grows. Expose to digital media, the young are no longer willing to wait. They want better life and India vision 2047 has to begin with providing them better life over the next 10 years and not 25 years. This is the challenge that the group of officers, entrepreneurs and faculty in this Symposium will try to overcome” said Professor Ashok Jhunjhunwala, President, IIT Madras Incubation Cell (IITMIC) and IIT Madras Research Park (IITMRP), speaking on the vision of the Symposium.