Total Read - 67        Comments - 0
INVC NEWS
New Delhi , Save Sharda Committee Kashmir (Regd.) called on Dr. Jitendra Singh MoS PMO , Space & Technology in Govt. of India and followed up the issue of re-opening of Sharda Peeth in POK , Pakistan. The minister directed the committee members led by its founder Ravinder Pandita to Joint Secretary MHA for re submission of file for Special LOC permit to undertake the pilgrimage.. The Committee further requested the minister to get satellite images of sub-terrain of Sharda to know the extent of Sharda civilization that existed 200 years ago for exploring the historical perspective. The Committee also pressed for inclusion of Sharda in J&K State Tableau on  Republic Day function next year.  A copy of judgement on preservation of Sharda Peeth received from Supreme court of POK (AJK) was also given to him. [caption id="attachment_283778" align="aligncenter" width="601"]

Demands re-opening of Sharda pilgrimage in PoK and Satellite imagery[/caption] It is for the first time since partition that flowers have been laid in the temple and a photo of Sharda Devi is installed inside the temple, through the civil society of PoK.  Save Sharda  committee , which is a pressure group for re-opening of Sharda Pilgrimage sees the accession and the present demand with the union of India as a CBM between the two neighbouring countries, that has not taken place since the partition. In a Press release issued by Ravinder Pandita, Head / founder member of the committee, stressed the need of setting up of Sharda University and facilitating J&K Hindus for annual pilgrimage on the lines of Sikhs undertaking Nankana Sahib yatra in Lahore, Pakistan every year was again highlighted. “ This demand is pending since along for which many Kashmiri Pandit organisations have been fighting, prominent amongst them being APMCC” , Ravinder Pandita said. On this occasion Commodore (Retd.) D.S. Sodhi, a  Committee member presented the hon’ble minister his historical books on J&K , authored by him. Sh. Surinder Mirza another member dwelt on the historical perspective and exploration of Sharda for the benefit of Sharda followers throughout the country. He gave a copy of the letter written this week by Sringeri Mutt head to the minister urging  the prime minister to take effective steps for reopening of peeth.
Read the full article
Tags: dr jitendra singh Ravinder Pandita Save Sharda Committee Kashmir authored by him. Sh. Surinder Mirza 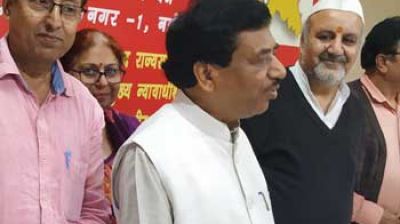 It has to be part of a holistic eco-system based...

India is a frontline nation in the field of space...