Sangita Gairola has released the Facsimile Edition of the Gilgit Lotus Sutra Manuscripts.

Secretary, Ministry of Culture Smt. Sangita Gairola has released the Facsimile Edition of the Gilgit Lotus Sutra Manuscripts here today. The Gilgit Manuscripts are among the most ancient in the world going back to the 6th century A.D. They are perhaps the only corpus of Buddhist Manuscripts discovered in India. These manuscripts on Bhoj bark were discovered by cattle grazers in 1931 and were sent to Srinagar where they were studied by Sir Auriel Stein who announced their discovery. The Lotus Sutra is one of the most important and influential of the sutras or scriptures of Mahayana Buddhism and is revered by almost all branches of the Mahayana teaching. It represents an unlimited philosophy of happiness, a philosophy of happiness and peace, a sacred text eternal in nature and unending in the creation of value. In the wake of an urgent need to expand the horizons of access to historical documents, the Facsimile Edition of the Gilgit Lotus Sutra Manuscripts has been brought out by the National Archives of India in collaboration with the Institute of Oriental Philosophy and Soka Gakkai. 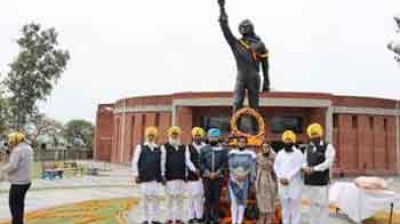