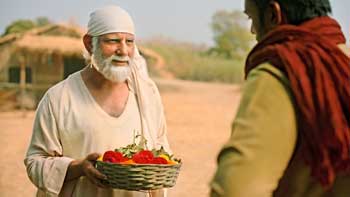 INVC NEWS
Chandigarh,
Every year the immortal stories of Shirdi Sai Baba have been growing exponentially and these have been shown a number of times on television and the big screen.

After the immense success of 'Aashram', MX Player is now coming up with 'Sabka Sai'. This 10-episode series will drop on August 26, but even before the show goes live, Twitter was trending with the questions about the normalization of superstition in the times of a raging pandemic like COVID19.

Many people on the social media platform felt that many self-proclaimed babas can use the peoples’  belief in superstition and play with the lives of the believers, and perhaps it is not the right time to release 'Sabka Sai', a show that sees one of India’s most revered saints perform miracles.

Defending the show, 'Sabka Sai' director Ajit Bhairavkar says that "There is no dearth of success in science and medicine in recent times, here doctors are like God because they have the power to save lives. I believe that positivity is the only way to live in this moment and Sai Baba's reverence and Saburi's teachings will go a long way in this endeavor. There will be some dishonest people who use the trust and goodwill of good people but that doesn't mean that we stop showing stories of goodness".

It is said that when both medicine and prayers come together, then the biggest pain can go away. Devotion to Sai is the most unique way to calm the mind of people battling the epidemic. Dubbed in Tamil and Telugu languages, the series featuring Gulki Joshi, Mohammad Samad, Akash Sinha and Manoj Kolhatkar in lead roles will stream free on MX Player starting August 26.
Read the full article
Tags: Cinema theatre television Chandigarh Web Series Art & Culture

Fatehgarh Sahib and Sangrur will become number one spot in...

Illegal constructions should be removed immediately