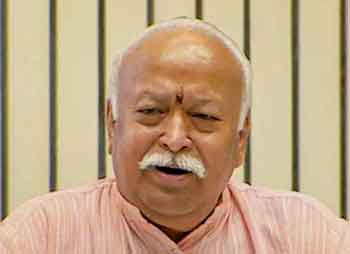 Taking an innovative initiative to strengthen the communal harmony and harmony in the country, Rashtriya Swayamsevak Sangh (RSS) chief Mohan Bhagwat has started a series of meetings and interactions with Muslim intellectuals. Recently, RSS chief Mohan Bhagwat met five Muslim intellectuals including former Chief Election Commissioner SY Qureshi, former Lieutenant Governor of Delhi Najeeb Jung and discussed all these issues. This discussion is being done at a time when the hearing on the Gyanvapi Masjid case is going on in the Varanasi Court.

According to a media report, RSS chief Mohan Bhagwat has discussed issues ranging from cow slaughter to the use of derogatory references in a meeting with these five Muslim intellectuals. Not only this, both sides have also resolved to meet from time to time to continue the dialogue on issues affecting both the communities.

It is said that the meeting, which was scheduled for about half an hour, lasted for about 75 minutes. The meeting took place about a month ago at Udyan Ashram, the temporary Delhi office of the RSS. In this, apart from RSS chief Bhagwat and Sah Sarkaryawah Krishna Gopal, intellectuals from the Muslim community, former Chief Election Commissioner SY Qureshi, former Lieutenant Governor of Delhi Najeeb Jung, former AMU Vice Chancellor, Lt Gen (Retd) Jamir Uddin Shah and RLD leader Shahid Siddiqui and businessmen Saeed Sherwani was prominently present.

On this occasion, there was a special discussion between the two sides and it was agreed that the country cannot progress without strengthening the communal harmony and reconciliation between the communities. Both sides are said to have supported the need for communal harmony and the need to address differences and misunderstandings between communities. A plan was also prepared for this.

The RSS chief had also met with a group of Muslim intellectuals at a hotel in Mumbai last year. In September 2019, Bhagwat had also met Maulana Syed Arshad Madani, chief of Jamiat Ulema-e-Hind at the RSS office in Delhi and discussed various issues including Hindu-Muslim unity, incidents of mob lynching.

Qureshi and Siddiqui said that the talks took place in a very cordial atmosphere. After the meeting, Bhagwat has appointed four senior functionaries to keep in touch with the Muslim community on a regular basis. On our part, we are contacting Muslim intellectuals, journalists, writers and professionals to continue this dialogue with the RSS.
Qureshi, who started the dialogue, said that he (Bhagwat) told us that people were unhappy with words like cow slaughter and kafir (used for non-Muslims).

In response, we said that we are also concerned with this and if anyone is involved in cow slaughter then he should be punished under the law. We told them that in Arabic Kafir is used for unbelievers and it is not an issue that cannot be resolved… We told them that we also feel sad when an Indian Muslim is called Pakistani or Jihadi . Qureshi said that he also questioned the continued slander of Muslims, especially propaganda about their population and the practice of polygamy, reinforcing negative stereotypes about the community.

RLD’s national vice president Siddiqui said that at the time of Nupur Sharma incident, he had first demanded to meet the RSS (BJP spokesperson spoke against the Prophet, which led to his suspension from the party, and violence took place at many places) ). We felt that due to this incident a toxic atmosphere has been created even within the Muslim community. However, by the time the date of meeting with Mohan Bhagwat was received, a month had passed since the Nupur Sharma incident, the matter had dwindled considerably.

Therefore, the issues of communal disharmony between the two communities were discussed. While RSS pracharak Sunil Ambekar declined to comment on the meeting. A Sangh source said that RSS chief Bhagwat keeps giving such appointments whenever someone asks for it.

Former CEC Qureshi says that he has been impressed by the talks of the meeting. During this, after meeting and discussing with him i.e. Mohan Bhagwat, he realized that he is a patient listener and lives very simply.

He also said that 99 percent of Indian Muslims have not come from outside, but converted here. Bhagwat said that where Hindus worship idols. At the same time, Indian Muslims also offer prayers in the Kabra (grave). Communal harmony is necessary for the progress of the country, we all agree. PLC/GT