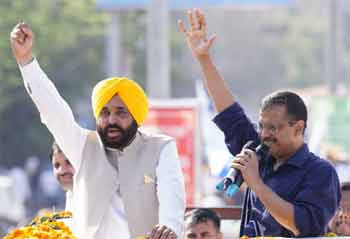 He said that the AAP government of Punjab has sent a proposal to the Air Quality Commission in this regard. This incentive to farmers will go a long way in promoting in-situ management of paddy straw and substantially reducing the level of air pollution mainly due to stubble burning in Delhi and NCR. According to a report, the details of all the farmers have already been uploaded on the ‘Grain Procurement’ portal of the state government.

Payment of crops purchased from farmers is also given through this portal. The government will give this cash incentive to farmers for not burning paddy straw and in-situ management through grain procurement portal. The government will rely on remote sensing imagery as well as physical verification of fields to check the claims made by farmers for demanding compensation. Officials of the state agriculture department have said that this is the first time that a cash incentive is being offered to farmers to keep them away from stubble burning.

The only subsidy given to Punjab farmers for purchasing in-situ management machinery is about Rs 1,145 crore since 2018. A report is quoted as saying that if the Indian government fails to release the funds, then we are going to give them at least Rs 1,000 per acre as compensation for not burning paddy straw. Rs 365 crore will be spent on both Punjab and Delhi government. If the Center agrees to pay its share of compensation of Rs 1,500 per acre to farmers, then their share will be Rs 1,095 crore. Paddy is being cultivated in 29.3 lakh hectares (73 lakh acres) in Punjab this year. Every year about 50 percent of the area under paddy is prepared by burning stubble for the next crop. Last year there were 76,680 incidents of stubble burning, the highest in many years. PLC/GT