Retired employees are an asset for the country 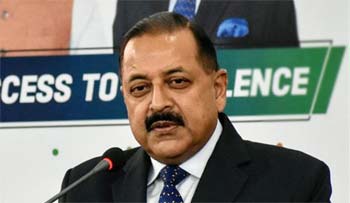 INVC NEWS
New Delhi,
The Union Minister of State (Independent Charge) for the Ministry of Development of North Eastern Region and Minister of State for Prime Minister’s Office, Ministry of Personnel, Public Grievances & Pensions, Departments of Atomic Energy and Space, Dr. Jitendra Singh said that the retired employees are an asset for the country and their energies should be utilised in an effective way. He was speaking at the Pre-Retirement counseling workshop and the ANUBHAV Awards, 2019 function organized by the Department of Pension and Pensioners’ Welfare, Ministry of Personnel, Public Grievances and Pensions, here today. The Secretary, DARPG and Pensions, Shri K. V. Eapen and the senior officers of the Ministry were also present on the occasion.

Dr Jitendra Singh also presented the ANUBHAV awards, 2019 on the occasion. The Anubhav portal was created on the call of Prime Minister in 2015 with a vision to preserve rich experience of retired official in digital form. It is envisaged that their rich experience will be preserved for future generation to learn and explore knowledge on various aspects of governance, culture & development history of a particular region. An award scheme to incentivize and encourage more retiring employees to submit their write-ups was introduced in 2016 and till three annual awards ceremony has been organized. This was fourth annual award in the series.

The Minister also inaugurated the All India Pension Adalat organised on the occasion. The Pension Adalats were also organised by various ministries and departments at different parts of the country. The Minister interacted with the nodal officers and the pensioners present at these Pension Adalats through live video conferencing. Thousands of cases were taken up during these Pension Adalats throughout the country. More than 50 centres were connected through live video conferencing with the event being organised in Delhi. During this year, at the Pension Adalat organised by the Department at New Delhi, 42 cases were taken up. These cases belonged to different ministries such as Ministry of Culture, Department of Atomic Energy, Rajya Sabha, Lok Sabha secretariat, etc. The Pension Adalat brings all stakeholder on a common table i.e. the aggrieved pensioner, the concerned department, the bank or CGHS representative, wherever relevant, so that such cases can be settled across the table within the framework of extant rules. States/UTs, are also conducting Pension Adalat for All India Service retired officers. It is a strategic initiative of Department of Pension & PW within 100 days of taking over of new Government.

The pre-retirement counselling workshop focussed on educating the retiring employees about various procedures related to the retirement. These included:  pension disbursement process, transfer of pension from one bank to another, role of CPPC in pension disbursement, Bhavishya portal, Digital Life certificate, Pensioners’ Portal/CPENGRAMS and welfare schemes of DoP&PW, medical facilities after retirement, wealth management and income tax concessions & other special facilities for senior citizens. The Minister also released a Booklet titled “Know Your Retirement Benefits”.

Speaking on the occasion, Dr Jitendra Singh said that pensioners are an important and valuable asset for the nation and their experience should be utilised for the benefit of country. He added that the number of pensioners is almost equal to the number of serving employees, so their (retired employees) energies also need to be channelized in a right direction. He said that in Prime Minister’s ‘New India’, these pensioners can contribute through their vision, capability and experience.  Congratulating the award winners, the Minister said that ‘Anubhavs’ (experiences) documented by them should be a subject matter of research. He said that under the leadership of Prime Minister Shri Narendra Modi, various initiatives have been taken for the benefit of pensioners, such as Digital life certificates, Pensions Portal, Grievance Cell for Pensioners and various other benefits for Army and CAPFs.

The Secretary, Pensions, Shri K. V. Eapen said that last year, 12, 849 cases were taken up at the Pension Adalat, out of which 9,368 cases were resolved. He said that this is an initiative to ensure that the retirement becomes smooth for the pensioners.  A Pension Dashboard has been opened for monitoring and various new innovations are being done in making the grievance mechanism more effective, he added.  He said that this effort is a part of 100 Day agenda of the Government which focuses on making the life of pensioners simpler.