Total Read - 62        Comments - 6
Sanjay Arora New Delhi........The Ministry of Water Resources has sent the recommendations of the studies carried out by the Indian Institute of Management, Ahmadabad,. Bangalore, Kolkata and Lucknow about gap between irrigation potential created and irrigation potential utilized to all state Governments and other stakeholders for implementation. It is observed that the gap between the created irrigation potential and the irrigation potential utilized has widened considerably through various Plans. It has been observed that out of 102 million hectare of irrigation potential created by the end of X Plan, the utilized irrigation potential was of the order of 87.2 million hectare indicating that about 15% of the created irrigation potential remained unutilized. Considerable increase in the gap between the irrigation potential created and irrigation potential utilized is definitely a matter of serious concern. Realizing the importance and urgent need for taking appropriate measures for optimally utilizing the created facilities for irrigation, the Ministry awarded studies to IIMs for ascertaining the possible reasons for the gap and identifying the measures for ensuring optimal utilization. IIMs have identified several reasons for the gap between the created irrigation potential and the irrigation potential utilized. However, the five dominant factors which have been found to contribute considerably to the gap are as under. a. Lack of proper operation and maintenance ; b. Incomplete distribution system; c. Non-completion of command area development; d. Changes from the initially designed cropping pattern; and e. Diversion of irrigable land for other purposes. The two very important factors which need to be addressed on priority are (a) lack of proper operation and maintenance, and (b) incomplete distribution systems. The report of the studies carried out by Indian Institute of Management, Ahmadabad, Bangalore, Kolkata and Lucknow were circulated to all the State Governments and other stakeholders. The reports were also uploaded on the web site of the Ministry of Water Resources and comments / views were invited from all concerned particularly on the findings and recommendations of the studies. With a view to further deliberate the findings of the studies, recommendations made by the IIMs and the valuable suggestions received from the State Governments and other stakeholders, a workshop was organized on 17th March 2009 at Delhi. Representatives from Water Resources Departments / Irrigation Departments / Command Area Departments of various States / Officers from various organizations under the Ministry of Water Resources also participated in the workshop. Some of the important points which emerged during the deliberations at the Workshop are as under : a. There is lack of proper provision in the budget for operation and maintenance of the of irrigation system which is matter of serious concern. Adequate budgetary provisions should be made for proper operation and maintenance. b. Non completion of distributaries and minors is a major factor in non utilization of the available water resources for irrigation purposes. c. Non completion of field channels and on-farm development has also contributed considerably to non utilization of water. Command area development need to be a part of the project itself and should be completed as early as possible. d. Adoption of improved irrigation practices micro irrigation, conjunctive use of surface and ground water and better management practices are necessary for improving the irrigation efficiency. e. There should be effective coordination among various Departments / Agencies involved in different aspects of irrigation management as well as in data observation / collection. f. Water Users’ association need to be appropriately empowered. g. Irrigated area which gets diverted from irrigation command to other uses (such as urban development, industrial development etc.) should be appropriately accounted for and should be deducted from the irrigation potential created. h. The crops to be grown by the farmers on year to year basis may not be as per the cropping pattern designed at the time of project planning in view of various factors including the market forces. However, an appropriate policy for entitlement of water and optimal utilization of the same need to be framed. i. The charges for water should be arrived at with due care and after considering all relevant factors including the water requirement for the crops. j. There is need to redefine the term “irrigation potential created” and “irrigation potential utilized”. ak. The value of “irrigation potential created” and “irrigation potential utilized” should be updated from time to time after taking into account the changes in the land use pattern. l. Due to lack of maintenance or poor maintenance, the efficiency of relatively older projects has been reduced considerably. Government of India may consider necessary assistance for extension, renovation and modernization or special repairs of such schemes. m. There is a need for analyzing the impact of sedimentation in reservoirs on its capacity and hence on the irrigation potential.
Read the full article
Tags: Indian Institute of Management 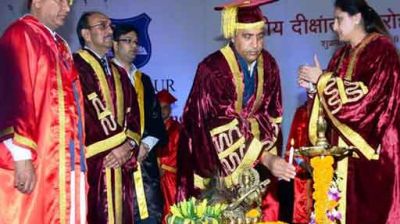 Young professionals have great role to play in making New...

I was happy to address the 52nd convocation of the...

IIM Calcutta hosts prestigious student board meeting of CEMS, a...

NDA government at the centre would soon allocate more such...

The SGPC was the supreme body of the Sikhs, which...

The concerns of Agriculture Sector are high on the priority...

Adding that appetite for continuous learning and intellectual growth held...

Attractive section of content. I just stumbled upon your weblog and in accession capital to assert that I get actually enjoyed account your blog posts. Any way I’ll be subscribing to your feeds and even I achievement you access consistently quickly.

Hi, my english isnt very best but I feel by regulary visits of one's blog it will be much better in the next time. You possess a excellent wrting design which is quick to understand and can aids persons like me to learn english. I will be now a regulary visitor of your blog.

Hi, my english isnt the most beneficial but I think by regulary visits of one's blog it are going to be much better inside next time. You possess a good wrting style which is simple to understand and can aids individuals like me to learn english. I will be now a regulary visitor of your blog.

Thats one of that submit which it is worth to bookmark. Truly great post.

I searched for this data since a extended time. With your web site submit it will likely be feasible to acquire more information in a shorter time.

Thanks for posting this, Itâ€™s just what I was browsing on bing. Iâ€™d much rather hear opinions from an individual, rather than a corporate web site, thatâ€™s why I like blogs so much. Thank you!