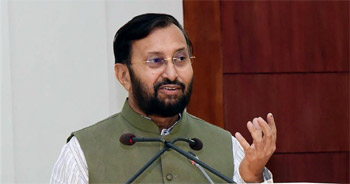 New Delhi,
Union Minister for Environment,Forest & Climate Change and Information and Broadcasting,Shri Prakash Javadekar today attended the inaugural session of the 15th National Convention on ‘‘Housing for All By 2022’’ in New Delhi. The minister spoke at length on a range of issues related to environment approvals for building and construction projects.

Shri Javadekar said that environment approvals which used to be a stumbling block before 2014, have now been simplified and standarized. “Before 2014,it used to take 640 days for a proposal to get Environment approval but we have simplified rules and now it takes 108 days for the same and very soon it will be further brought down to 60 days but at the same time without compromising on environment protection”, said the Union Minister.

The Environment minister said that we are entrusted with the work of both environment protection and at the same time fostering growth. “Earlier projects  above Rs 50000 sqm used to be under the purview of centre but now even projects  above Rs 1.5 lakh sqm and above are delegated to states”, said Shri Javadekar. The minister stated that the efforts of the ministry is towards making rules simpler, making fewer rules but strict implementation of them and the focus is promoting ease of doing responsible business.