Total Read - 76        Comments - 6
INVC,, Venezuela,, Murli Deora, Minister of Petroleum and Natural Gas along with Shri S.Sundareshan, Secretary Petroleum; Chairman Indian Oil Corporation Limited; Chairman, Oil India Limited; Managing Director, ONGC Videsh Limited and other senior officials from the Ministry of Petroleum and Natural Gas participated in the signing ceremony presided by the President of the Bolivarian Republic of Venezuela, Mr. Hugo Chavez Frias for signing a joint venture agreement with the Corporación Venezolana del Petróleo S.A. (CVP) for the development and production from Carabobo-1 Project, in Orinoco Region of Venezuela. The signing took place in Caracas, the capital city of Venezuela, late yesterday night (India time). The new joint venture is PetroCarabobo S.A. Alongwith OVL, IOC and OIL, the other two partners of the consortium i.e,Spanish Major Repsol and Malaysian Petronas also signed the joint venture agreement. The consortium of ONGC Videsh Limited (“OVL”, 11.0%), Indian Oil Corporation Limited (“IOC”, 3.5%), Oil India Limited (“OIL”, 3.5%), Repsol YPF (“Repsol”, 11.0%) and Petroliam Nasional Berhad (“PETRONAS”, 11.0%), (collectively, the “Consortium”), was selected by the Government of the Bolivarian Republic of Venezuela on 10th February 2010 for awarding a 40% ownership interest in an “Empresa Mixta” (or “Mixed Company") which will develop the Carabobo 1 Norte and Carabobo 1 Centro blocks located in the Orinoco Heavy Oil Belt. The Corporación Venezolana del Petróleo (“CVP”), a subsidiary of Petróleos de Venezuela S.A. (“PDVSA”), Venezuela's state oil company, will hold the remaining 60% equity interest. The Mixed Company will build heavy oil production facilities, upgrading facilities and associated infrastructure. The upstream production facilities are expected to produce around 400,000 barrels per day of extra heavy oil of which approximately 200,000 barrels per day will be upgraded into light crude oil in a facility to be located in the Soledad area, Anzoátegui State. The license term will be for 25 years with the potential for a further 15 year extension. The project costs are estimated at US$ 15 – 20 Billion dollars and is one of India’s major investments in the Latin American oil major. Meeting President Chavez After the conclusion of the signing ceremony, Shri Murli Deora, Minister of Petroleum and Natural Gas had a warm and cordial meeting with the President of the Bolivarian Republic of Venezuela, Mr. Hugo Chavez Frias. In the meeting, the possibility of sourcing Venezuelan Crude to meet the requirements of new refinery capacities coming up in India was discussed. Discussions were also held on the possibility of award of Junin Norte block, where new oil reserves are being certified by ONGC Videsh Limited. Venezuelan side was receptive to these and expressed interest in establishment of refineries in India / Venezuela with involvement / assistance from Indian oil sector companies. The Venezuelan side expressed intention of furthering cooperation with India and a desire to develop a special relationship with India. Background The Government of the Bolivarian Republic of Venezuela has given high priority to increase production of extra-heavy crude oil from the Orinoco Oil Belt for the purpose of promoting national development. The Government offered seven blocks in the Carabobo area, with combined oil in place estimated at around 128 billion barrels. The blocks were grouped into three projects with each project expected to produce a plateau of 400,000 barrels of 8° API oil per day for 40 years. The Carabobo area, located in the eastern section of the Faja, has a massive resource potential and is part of an extensive reserve certification process led by PDVSA. The US Geological Survey, in a recent report has estimated mean volume of recoverable heavy oil in the Faja to be as high as 513 billion barrels which is one of the few global opportunities open to private investment. [caption id="attachment_13297" align="alignnone" width="500" caption="The Union Minister of Petroleum and Natural Gas, Shri Murli Deora with the President Mr. Hugo Chavez Frias of Bolivarian Republic of Venezuela discussing on cooperation in oil sector, at Caracas"] 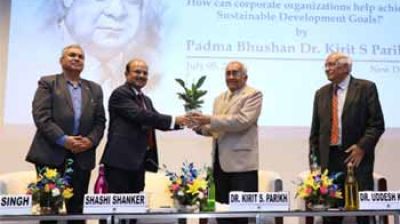 Dr Kirit Parikh pitches for Sustainable Development Goals at the...

ONGC mourns the death of contractual worker at Dehradun ;...

ONGC Videsh signs ‘Memorandum of Understanding and Cooperation’ with Pemex-Exploracion...

The very root of your writing whilst appearing reasonable in the beginning, did not really work very well with me personally after some time. Someplace throughout the sentences you managed to make me a believer unfortunately only for a very short while. I however have a problem with your jumps in assumptions and one would do well to fill in all those gaps. In the event you can accomplish that, I would definitely end up being fascinated.

Hello there, just become alert to your blog thru Google, and found that it's really informative. I am going to be careful for brussels. I’ll be grateful if you happen to proceed this in future. Numerous folks shall be benefited from your writing. Cheers!

Thanks so much pertaining to giving me an update on this subject on your website. Please understand that if a completely new post becomes available or in case any improvements occur on the current submission, I would be interested in reading more and knowing how to make good using of those strategies you talk about. Thanks for your time and consideration of others by making this web site available.

I thought you were going to chip in with some decisive insigth at the end there. Not leave it with 'we leave it to you to decide'

Wow. Thankyou for sharing. I certainly did not think about this particular issue in that way before and it opened some serious discussion for me on this topic.

Thanks for the well-thought article. I'm actually at work at the moment! So I need to go off without reading all I'd like. However, I put your blog on my yandex feed so that I can read even more.