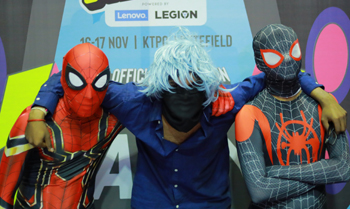 Organised in association with Vapour Indiranagar, the party was a precursor to city’s 8th edition of the pop culture extravaganza

INVC NEWS
Bengaluru,
With less than a week left to ring in the much-awaited 8th edition of Maruti Suzuki Arena Bengaluru Comic Con powered by Lenovo, the excitement goes a notch higher. The 2019 season of Comic Con India organised the official Comic Con Superhero Party for the city’s cosplay enthusiasts in association with Vapour Indiranagar.

From Spiderman, Black Widow, Iron Man, Captain America and Wolverine to Superman, Batman, Wonder Woman and Justice League, the official superhero-themed party witnessed pop culture fans dressed up as their favourite characters and indulging in tons of contests, gifts, selfie points, and other such machinations. The party also had a Comic Con special spread curated by Vapour.

Jatin Varma, Founder, Comic Con India said, “Cosplaying has become big in India and is now an integral culture many of the country’s pop culture enthusiasts are now following. This superhero themed party was organised to trigger the excitement of city’s cosplayers for the main event on 16th and 17th November at KTPO, Whitefield.”

So Bengalurians! Get your costumes and gears on for the #BestWeekendoftheYear.

It’s All About The Style, Craft, Quality Of Your Beer

Consumers can encourage change through their choices and behaviour

Coworking spaces are witnessing robust operations in the current scenario