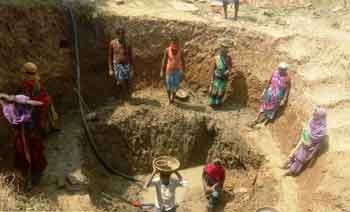 INVC NEWS
Haryana,
Haryana Chief Minister Manohar Lal has directed the Deputy Commissioners to focus on a micro-irrigation system so as to ensure that water reaches every field.

The Chief Minister was presiding over a review meeting held here today regarding micro-irrigation and Parivar Pehchan Patra with the Deputy Commissioners held through video conferencing.

The Chief Minister said that the State Government aims to provide water to every field located in every corner of the state.

He said that at the places where irrigation is done with canal water, there more and more farmers should be motivated to adopt a micro-irrigation system so that the farmers of the areas facing water scarcity should also get more and more water for their fields.

Meanwhile, out of these eight districts,   four districts namely Bhiwani, Charkhi Dadri, Mahendragarh and Rewari were directed to ensure the implementation of the scheme in a more focussed manner.

The Chief Minister said that as there is more water problem in the districts adjoining Rajasthan, therefore more focus should be given to speed up the micro irrigation system in these districts along with ensuring the appointment of adequate staff of irrigation department for these districts.

The Chief Minister took feedback from the Deputy Commissioners on various points of the Parivar Pehchan Patra scheme and asked them to expedite the survey work.

He directed the Deputy Commissioners to constitute a team of officers of six departments at the earliest so that work can be done to increase the income of the very poor families.

There is a need to work for the economic upliftment of poor families considering it as a social responsibility.  For this, volunteers, college students and social workers should be encouraged so that survey work can be completed soon so as to ensure that poor families are benefited at the earliest.