Pollution levels must reduce by 70% for a healthy life

New Delhi , Experts have called for responsible use of resources, sustainable development, use of technology and a multi-pronged approach to handle the grave public health and public policy challenges posed by air pollution in Delhi.

Speaking at the Consultation organized by the Jindal School of Government and Public Policy of O.P. Jindal Global University, they stressed the need for political will, stricter enforcement, stronger legal and institutional frameworks, building the human resources and technological capacity of Pollution Control Boards, behavioural changes in the public to mitigate the ill effects of pollution. Fuel substitution policy, quicker transition to BS VI norms, electric charging points across the country for vehicles, Regulatory Performance Index and holding authorities accountable, spreading awareness, community kilns, green fund were among the many suggestions made by senior government officials, concerned citizens, scholars and activists who attended the consultation. Expressing serious concern over the ill effects of air pollution which can reduce life span by ten years, the Founding Chancellor of O.P. Jindal Global University, Mr. Naveen Jindal said that the Consultation was organized with the aim to find practical solutions to this problem. Stating that this is not the responsibility of the government alone, he said that, “every citizen must play his or her role.” Mr. Jindal observed, "the purpose of this consultation is to bring together all stakeholders with a view to developing a clear understanding and implementable set of measures to tackle air pollution in Delhi." In his inaugural address, the Chief Secretary, Government of Delhi, Mr. Vijay Kumar Dev emphasized the need for joint efforts by the government and citizens as well as greater coordination between different agencies. He suggested a two pronged strategy which includes the fixing accountability of field level staff responsible for combating pollution along with convergence of efforts made by various stakeholders from the policy making to implementation level. In addition, Vijay Dev emphasized that community groups and resident welfare associations should be empowered and made partners in enforcement of laws and standards. Harsh measures wherever required must be taken, he added. He referred to the Delhi government’s decision to add 4,000 new buses in 2019 of which, 1,000 will be electric. In his key note address, Hon'ble Mr. Justice Swatanter Kumar, Former Chairperson, National Green Tribunal and former Judge, Supreme Court of India said “We have almost 1,650 unauthorised colonies in Delhi. There are major challenges pertaining to sanitation and waste treatment. This adds to the overall crisis of environmental degradation. The government cannot act in isolation and needs support from people. Academia is the best source of bringing ideas and innovations for the betterment of society.” Dr Bhure Lal, Chairman, Environment Pollution (Prevention and Control) Authority said, “Air pollution has socio-economic dimensions. Rag pickers burn rubber tyres in winter. Old cars cause damage and the vicious cycle of poverty and pollution goes on. Our pollution levels need to be reduced drastically, almost by 70 per cent to enable us to lead a clean and healthy life, he added. Vice-Chancellor of the O.P. Jindal Global University, Dr. C. Raj Kumar said: “We need an informed understanding of air pollution and its problems to arrive at solutions. Many cities in South Korea, China and the USA have set amazing examples to curb this menace and it’s our turn now to make Delhi pollution free. We really wish to be a society that respects the environment. The first and foremost step that we have to take is to change the way of life and develop the essence of collective consciousness so that people become much more environmentally sensitive. We need to highlight the major sources of environmental degradation and come up with effective solutions. We will be partnering with the government, providing intellectual support and come up with effective solutions that can reach to the implementation stage”. Stressing on the role of academia and student-led initiatives, Professor R Sudarshan, Dean, Jindal School of Government & Public Policy highlighted JGU’s initiatives to address the issue of crop residue burning. He said, “JGU has allocated special research grants to students and faculty. They will interact with farmers in JGU’s neighbourhood and demonstrate sustainable environmental friendly farming methods. Once farmers see for themselves the real benefits of changing prevalent practice of burning crop residues, they will become leading champions for curbing pollution.” Lt. Gen A. K. Singh, Advisor to JGU, pointed out the proactive role educational institutions can play championing the cause of clean air and said, “The whole idea of the consultation is to bring experts together to draw up and implement a road map on a priority basis.” He added that accountability of all, officials and citizens, for their actions, and committed leadership are critical factors that can make it possible for healthy living in Delhi. In his remarks, Registrar, JGU, Prof. Y.S.R. Murthy called for a “Green Police Force” and vigilant monitoring of pollution by citizens and civil society groups. In the course of this consultation, participants shared empirical data and insights that could result in a sustainable strategy for abatement of air pollution. The participants included, among others,  Mr. Laveesh Bhandari, Indicus Foundation, New Delhi; Mr. Polash Mukherjee, Centre for Science and Environment (CSE), Delhi and Mr. Ajay Shankar, Distinguished Fellow, The Energy and Resources Institute (TERI), New Delhi, and Nitin Sethi, Senior Editor, Business Standard. Dean, Jindal School of Banking and Finance, Prof. Ashish Bhardwaj, senior faculty members of JGU and students also participated in the Consultation.
Read the full article
Tags: pollution Chairman New Delhi Registrar JGU Dr Bhure Lal Environment Pollution (Prevention and Control) Authority Laveesh Bhandari Indicus Foundation Prof. Y.S.R. Murthy

CBI arrests an inspector and head constable of rpf in... 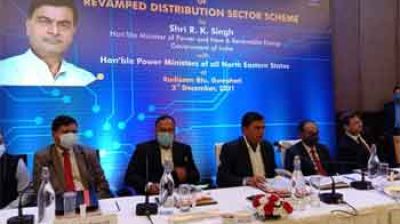