Sub-optimal or poor nutrition is escalating diet related non communicable diseases (DR-NCDs) in India, putting at risk millions of children. A country with the greatest number of malnourished 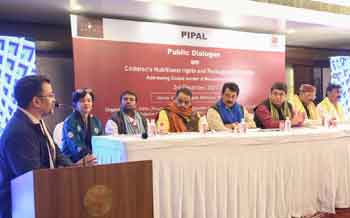 children in the world, India is home to around 15 million obese children and 45 million who are stunted. At a public dialogue in Varanasi, senior members of major political parties came together to sound a clarion call for India to adopt front-of-pack labels (FOPL), an important and timely policy fix to address the country’s double burden of malnutrition (DBM).

Recent studies of low and middle income countries with DBM have revealed that children and adults in the poorest income quintile face a greater prevalence of overweight and obesity than do those in higher income quintiles. These increases in overweight/obesity are largely the result of rapid, increased availability and consumption of ultra-processed foods across all sections of society. The food and beverage industry in India is one of the world’s largest with a sales volume of 34 million tons. Studies have shown that in Indian households – both urban and rural, 53% of children consume salted packaged food such as chips and instant noodles, 56% consume sweet packaged food such as chocolates and ice cream and 49% children consumed sugar-sweetened packaged beverages at an average of over twice a week. Experts have raised alarm that unhealthy diet is responsible for more deaths worldwide than any other risk factor, and is a leading cause of obesity, type 2 diabetes, and cardiovascular disease.

A.K Sharma, UP State Vice President, BJP & MLC joining the event virtually said, “India's winning strategy to ensure a healthier tomorrow for its children could consist of a simple, interpretive and mandatory  front-of-pack label. It is the right time for a policy instrument that can empower people to make healthier choices and save lives. We provide our support to FSSAI and eagerly await an FOPL regulation that is good for the people of this country.”

Adverse impact of ultra-processed food and beverages is more pronounced on children who are stunted or have received inadequate nutrition early in their life. They are more susceptible to obesity and may have a higher risk of NCDs as adults. Pre-packaged, ultra-processed foods and drinks, readily available and marketed in all parts of the country, purchased across all income levels, are processed with high levels of added sugars, sodium and saturated fats that raises the risk of diabetes, heart disease, liver and kidney damage, and some cancers. The first step to an effective FOPL is a science and evidence based nutrient profile model which will set mandatory thresholds for these anti-nutrients.

Speaking at the event, Lalji Desai, National President, Congress Seva Dal, said, “Ultra-processed foods and drinks are relatively cheap and their ready-to-eat availability saves time costs for urban workers and their children. With rising incomes, the formal labour work force increasingly seek and consume processed foods. The food industry’s glitzy marketing tactics have a big role to play in this transition of dietary choices even in the economically poorer sections of the society. We, as representative of the people, can play an important role in ensuring all food available in the market has cut-offs for harmful ingredients as recommended by science.”

Shri Ashutosh Singh, MLC and & Consultative Committee Member – Prevention of adulteration of foods and prevalence of counterfeit drugs, Government of U.Psaid, “In Uttar Pradesh, especially in Varanasi, ready to eat or ready to heat ultra-processed food, is fast becoming the food of choice for the migrant workforce who neither have time nor resource for cooked meals. Adopting an FOPL with strictly regulated thresholds for salt, sugar and saturated fats will improve the healthfulness of the poorest and most vulnerable.”

Sharing the FOPL experience of other countries such as Chile, Brazile, Mexico and Argentina, Vandana Shah, Regional Director, Global Health Advocacy Incubator (GHAI) said, “Warning labels are the most effective FOPL labelling system to date. They work by helping consumers identify unhealthy products in a quick and simple way and by discouraging them to buy. In Chile for example, the ‘high in’ black octagon shaped warning labels have resulted in a sharp drop in purchase of sugary drinks. Globally, obesity is affecting countries across all income groups and evidence shows that people from lower socioeconomic status, end up consuming unhealthier food. India has the opportunity to becoming a global leader by adopting – an effective FOPL with WHO mandated cutoffs geared to fight the double edged sword of malnutrition.”

Hailing the gathering as a historic one, Dr Lenin Raghuvanshi, Founder and CEO, People’s Vigilance Committee on Human Rights (PVCHR), said, “Senior leaders across political parties along with health experts and human rights defenders have come together to secure the nutrition rights of Indian children. India’s FOPL regulation is now a shared agenda.”

Strict implementation of public health and social measures a must... 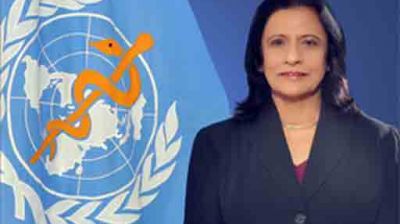 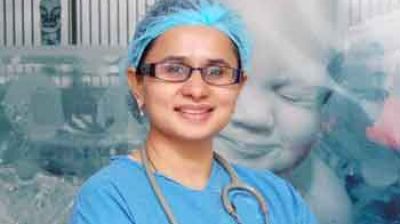 Fertility and Vaccination during Covid -19 Pandemic