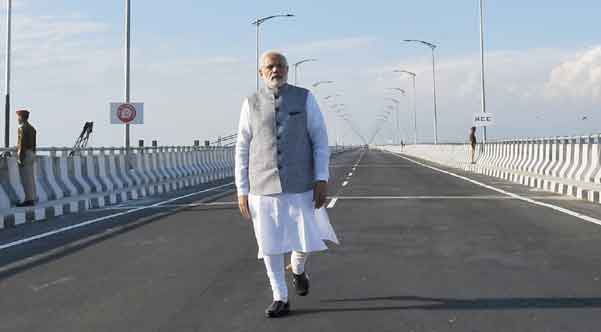 Prime Minister Shri Narendra Modi will visit Assam and West Bengal on 22nd February 2021. At around 11:30 AM, Prime Minister will dedicate to the nation important projects of the oil & gas sector in an event organized at Silapathar  in Dhemaji, Assam. He will also inaugurate and lay the foundation stone for Engineering Colleges during the event. At around 4:30 PM, Prime Minister will dedicate to the nation and inaugurate several railway projects in Hooghly, West Bengal.

Prime Minister Shri Narendra Modi will dedicate to the nation the INDMAX Unit at Indian Oil’s Bongaigaon Refinery, Oil India Limited’s Secondary Tank Farm at Madhuban, Dibrugarh and a Gas Compressor Station at Hebeda Village, Makum, Tinsukia. He will also inaugurate the Dhemaji Engineering College and lay the foundation stone for Sualkuchi Engineering College. These projects will usher in an era of energy security and prosperity, and open bright avenues of opportunity for local youth. They are in line with the Prime Minister’s vision of Purvodaya to drive Eastern India’s socio-economic growth. Governor and Chief Minister of Assam, and Union Minister for Petroleum and Natural Gas will also be present on the occasion.

The INDMAX unit at Indian Oil’s Bongaigaon Refinery leverages the technology developed indigenously by Indian Oil-R&D to produce a higher LPG and high-Octane Gasoline yield from heavy feedstocks. The unit will increase the Refinery’s crude processing capacity from 2.35 MMTPA (million metric tonnes per annum) to 2.7 MMTPA. Its commissioning will also significantly enhance LPG production from 50 TMT (thousand metric tonnes) to 257 TMT and the Motor Spirit (Petrol) production from 210 TMT to 533 TMT.

Oil India Limited’s Secondary Tank Farm has been built for safe storage of about 40,000 Kilo Litres of Crude Oil, and the separation of formation water from Wet Crude Oil. The Rs 490 crore project will also have a Dehydration unit with an operating capacity of 10,000 Kilo Litres per day.

Prime Minister will inaugurate the extension of Metro Railway from Noapara to Dakshineswar, and flag off the first service on this stretch. This 4.1 km extension has been constructed at a cost of Rs. 464 crore, fully funded by the Central Government. It will decongest road traffic and improve urban mobility. This extension will ease out access to the two world famous Kali Temples at Kalighat and Dakshineswar, for lakhs of tourists and devotees. The two newly built stations namely Baranagar and Dakshineswar have modern passenger amenities and are also aesthetically designed and decorated with murals,  photographs, sculptures and idols.

Prime Minister will also inaugurate the third line between Kalaikunda and Jhargram over a  stretch of 30 km of the 132 km long Kharagpur-Adityapur Third Line Project of South Eastern Railway, which  was sanctioned with an estimated cost of Rs. 1312 crores. The four stations between Kalaikunda and Jhargram have been redeveloped by constructing four new station buildings, six new foot over bridges and eleven new platforms, along with renovation of the existing infrastructure. It will help ensure seamless movement of passenger and freight trains on Howrah-Mumbai Trunk route.

Prime Minister will dedicate to the nation the doubling of Azimganj to Khargraghat Road section, which is a part of Howrah – Bandel – Azimganj section of Eastern Railway, which has been laid at a project cost of about Rs 240 crore.

These projects will ensure better operational fluidity, less journey time and enhanced safety of train operations, as well as boost the overall economic growth of the region.