Home Business Career / Profession PM Modi said that I see the maturity of democracy in your... 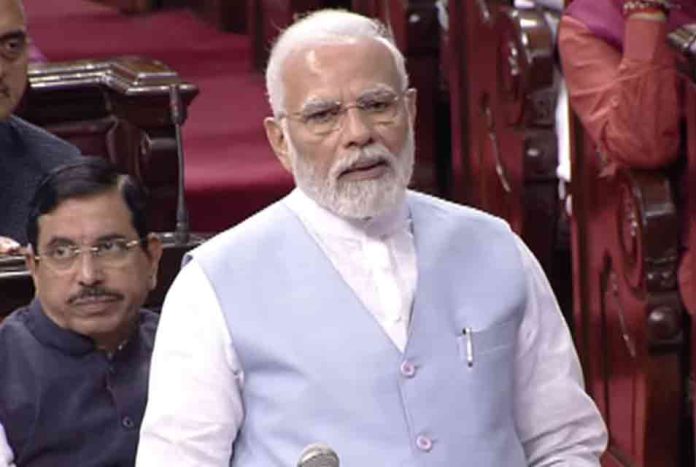 The Prime Minister remembered many moments that were marked by the wisdom and wit of Shri Naidu. Noting the change of complexion of leadership in New India, the Prime Minister said “when we mark 15th August this year, it will be an Independence Day when the President, Vice President, Speaker and Prime Minister would have been born after Independence. And that too, each of them belongs to very simple backgrounds.”  This has a great symbolic value and is a glimpse of a new era, he added.

The Prime MInister highlighted the wit and word power of the Vice President. He said “your each word is heard, preferred, and revered…and never countered” The Prime Minister continued “The one liners of Shri M. Venkaiah Naidu Ji are famous. They are wit liners. His command over the languages has always been great” The Prime Minister said that both in the House and outside, massive expression skills of the Vice President have made a great impact. “There is both depth and substance in what Shri M. Venkaiah Naidu Ji says, it is as direct as incomparable, there is both wit and weight, warmth as well as wisdom in what you say ”, he said.

Referring to the humble beginnings of the the political career of Shri M. Venkaiah Naidu in South India where his chosen ideology had no immediate prospects, the Prime Minister said the Vice President’s Journey from a political worker to the President of his party is a reflection of his indomitable steadfastness in ideology and tenacity. “If we have feelings for the country, art of putting forward our views, faith in linguistic diversity then language and region never become obstacles for us and you have proved this”, The Prime Minister said. The Prime Minister also touched upon the love for the mother tongue of the Vice President. He said “One of the admirable things about  Venkaiah Ji is his passion towards Indian languages. This was reflected in how he presided over the House. He contributed to increased productivity of the Rajya Sabha”.

The Prime Minister pointed out that the systems established by the Vice President, his leadership gave new height to the productivity of the House. During the years of the Vice President’s leadership, productivity of the House increased by 70 percent, attendance of the Members increased, and a record 177 bills were passed or discussed. “You have taken so many decisions that will be remembered for the upward journey of the Upper House”, the Prime Minister said.

The Prime Minister lauded the tactful, wise and firm conduct of the House by the Vice President and praised him for holding a firm belief that beyond a point, disruption in the House becomes contempt of the house. “I see the maturity of democracy in your standards”, the Prime Minister said. He appreciated the adjustment, communication and coordination with which he kept the house going even during the difficult  moments. The Prime Minister praised Shri  M. Venkaiah Naidu’s view ‘let Government propose, let Opposition oppose and let the House dispose’. This House has the right to accept, reject or amend the proposals from the other House but our democracy does not envisage stalling the proposals received from the other House, he said.

The Prime MInister thanked the Vice President for his guidance and contributions to the House and the country.