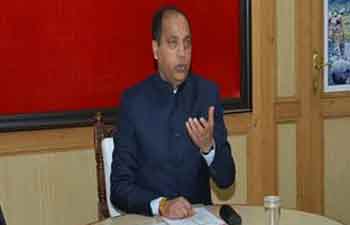 Chief Minister Jai Ram Thakur has urged the people of the State to play cautiously against Covid-19 as this time the virus had come back with more strength, energy and was more fatal. The health experts had observed that after the advent of new variants of Corona, there were no traces of cough or fever and the patients were just complaining of joint pains, weakness and loss of appetite and Covid-19 pneumonia. It was taking less time to get to extreme in comparison to the past and sometimes, there were no symptoms even. Therefore it was better to be careful than remaining unguarded and putting ourselves, family and the society in danger.

Jai Ram Thakur was presiding over a review meeting of the state of Corona Virus in Himachal Pradesh organized today at the premises of Dr. Rajendra Prasad Medical College, Tanda, in district Kangra.

The Chief Minister asked the health authorities and local administration to keep a close vigil on the persons advised and kept under home isolation. Local Panchayati Raj representatives should be involved in monitoring such persons and encourage the people to take precautionary measures in fight against this deadly virus. No person should be allowed to walk without wearing a mask in public places. Shopkeepers should not allow the people to enter their outlets without masks and proper hygiene habits should be practiced to keep this virus at bay. Without maintaining social distancing it was difficult to beat Corona. All the safety mantras given by the health authorities should be practiced in spirit to play safe as this would help us in keeping the economic activities alive and not upsetting development, progress and economy of the country.

Jai Ram Thakur directed the health authorities to enhance testing of Corona virus in order to stop the community spread. He said that it had been seen that the new strain was not domiciled in our nasopharyngeal region and had been directly affecting the lungs, which means window periods were shortened. The Chief Minister asked the health department to encourage the people to take a jab at high time so that they were less affected by this fatal virus. He urged the people to be careful and avoid crowded places as far as possible and wear face mask all the time while being at public places and transport. The practice of frequent hand washing should be continued as it simply ensures health. He said that due to negligence of the people the number of new cases had been increasing daily putting the society in peril at large.

Earlier, Chief Medical Officer, Kangra Dr. Gurudarshan Gupta said that after the new strain hit of Corona virus across the country, a number of patients were being seen without fever, but an x-ray report shows moderate chest pneumonia. It meant that the virus spreads directly to the lungs causing acute respiratory distress due to viral pneumonia. It simply explains why the new strain had become acute and more fatal. The new wave was more lethal than the first one and we should play safe by adopting right health practices to beat this new unwanted guest.

Deputy Commissioner Chamba, D.C. Rana while interacting through video conference briefed about the Covid-19 scenario of Chamba district. He appealed the people to become an alert communicator among friends and family and practice health advisory issued by the health authourities and administration.