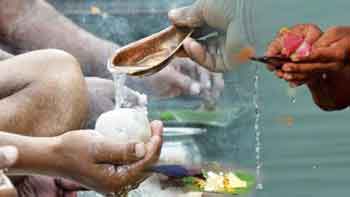 Know everything about Pitru Paksha 2023, Pind Daan and Tarpan for the ancestors in Pitru Paksha

For these 16 days, devotees will offer water to their ancestors. It is a religious belief that by offering Pind Daan or tarpan for the ancestors, their soul gets salvation. Just as gods and goddesses are worshipped, similarly ancestors are worshiped in Pitru Paksha. Due to which the ancestors are pleased and bless their family members with happiness and prosperity. With these wishes, devotees worshiped the priests by law and offered water from Til Kush etc. after remembering the ancestors at the pond ghat.

Let us tell you that Pitru Paksha, which started from the full moon of Bhadav month, will end on the new moon day of Krishna Patra of Ashwin month. By doing the work related to the ancestors in these favors, the blessings of the ancestors are also obtained. It is believed that by this the ancestors attain salvation. Pitru Paksha is also known as Shradh Paksha.

Water is given to ancestors in the south direction.

According to the Purana, the date on which the person died. He should perform Shradh on the same date. If the exact address of the day of his death is not known. His Shradh should be done on Amavasya Tithi. Shradh is performed on the date of death. On the day of death, ancestors are allowed to take food and water given by their families. That is why on that day the ancestors are anywhere in the world in whatever form they are. Take the diet accordingly. It should be known that Til and Kush have special significance in the Shraddha Paksha. According to Garuda Purana, all the three gods Brahma, Vishnu and Mahesh reside in the root, middle and front part of Kush respectively. The front part of the Kush is considered to be of the gods, the middle part of humans and the root part of the ancestors. On the other hand, sesame is the favorite of ancestors and is considered to drive away evil spirits. PLC/GT

Indira Ekadashi 2022: Get rid of such debts and life-long sufferings