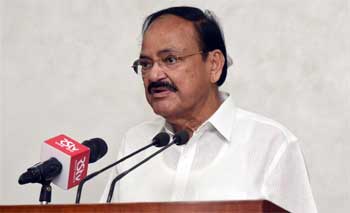 INVC NEWS
New Delhi,
The Vice President of India M. Venkaiah Naidu has called upon the Corporate, philanthropists and eminent sports personalities in India to supplement the efforts of the government in building sports infrastructure, especially in the northeastern region. He said Government’s efforts to improve sports facilities must be supported by one and all.

Interacting with about 20 young boxers from Mary Kom’s Regional Boxing Foundation in Imphal, Manipur, who are on a National Interactive Tour organized by the 15 Assam Rifles, in New Delhi today, Shri Naidu said that there was an urgent need to create the necessary environment for sports to thrive in the country to make India a global sports superpower.

The Vice President lauded the government of India, for launching Khelo India campaign to identify, encourage and support sporting talent from all corners of the country by giving them top-notch infrastructure and training of the highest level.

Shri Naidu asked champions like Mary Kom, P.V. Sindhu, Saina Nehwal, Dipa Karmakar, and others take lead and inspire the youth, especially the children to take up sports. “There is an urgent need to take this to the grass-root level and create a strong framework for all types of sports in the country and make India a great sporting nation,” he added.

Stressing the need to revive the sporting culture and nurture it right from school age, the Vice President said that Games and Sports or Yoga or any physical activity must become integral to people’s daily routine.

Pointing out that staying fit and staying healthy would have a bearing on the wellbeing of a person, family and the society at large, he said that: “A youthful nation such as ours with more than 65% of the population under the age of 30 must encourage the children, the youth and the elders to stay fit by doing any form of physical activity.”

Referring to Prime Minister, Shri Narendra Modi’s call asking the youth to visit at least 15 tourist destinations within India by 2022 to give a boost to domestic tourism, Shri Naidu said such visits would enhance their understanding of the unique cultural mosaic of the country.

Stating that traveling was an essential part of life and it teaches many things that could not be taught in the classroom, the Vice President asked youngsters, especially students to undertake ‘Bharat Dashan’to learn about various facets of India’s culture, heritage, languages, and cuisine.

The Vice President showered special appreciation to Smt. Mary Kom and her Husband, Shri K. Onler Kom for establishing Regional Boxing Foundation to train children and youth from remote and far-flung areas of Manipur and other North-Eastern parts.  He complimented the 15 Assam Rifles for organizing the National Interactive tour for these boxers.

The spouse of the Vice President, Smt. Usha Naidu, representatives of 15 Assam Rifles and other dignitaries were present on the occasion.

The planet does not needs us while we need the...

University to take prompt action on finalizing the examination calendar...

Large number of studies offer scientific evidence for its potential...