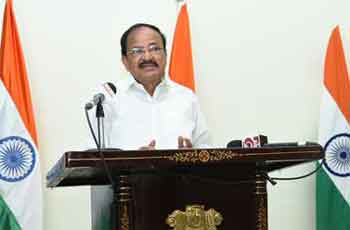 In order to deliver the benefits of our language traditions to the future generations, the Vice President Shri M. Venkaiah Naidu today stressed the need for a people’s movement to preserve languages, complementing the efforts of the government.

Highlighting the power of language to unite people across generations and geographies, Shri Naidu called for a concerted effort to preserve, enrich and propagate our languages, cultures and traditions.

Speaking at the 6th annual ‘Rashtretara Telugu Samakhya’ conference, Shri Naidu suggested that Telugu people should come together as one for the cause of Telugu language and the revitalisation of our local traditions.

Noting that neglecting a language will lead to its decline, the Vice President advised that it is the duty of each individual to preserve and promote one’s mother tongue, without belittling other languages and cultures.

Shri Naidu also underscored the need for primary education to be in one’s mother tongue, as envisaged by National Educational Policy, 2020. He noted that the persons presently occupying the highest constitutional offices of the country, including the President, Vice President, Prime Minister and the Chief Justice of India all had primary education in their mother tongue. “People should not have the false impression that one cannot succeed and grow in life if they learn in their mother tongue. We have many past and present exemplars to disprove that”, he said.

The Vice President also called for more initiatives in translating Telugu literature into other Indian languages, thereby spreading the richness of one’s language tradition. Appreciating the fact that many such cultural organisations continued their work online in the wake of the pandemic, Shri Naidu suggested that efforts be intensified to integrate language and technology in the same spirit.

Noting that there are more than a thousand organisations outside the Telugu states for the preservation and propagation of the Telugu language, the Vice President commended the initiative of the organisers in coming together on a common platform called ‘Rashtretara Telugu Samakhya’. He conveyed his best wishes for their future endeavours.