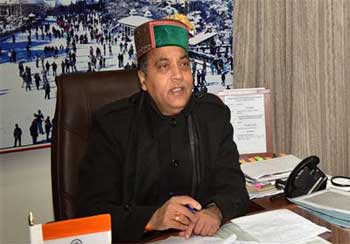 INVC NEWS
Shimla,
The State Government was committed to ensure balanced and equitable development of the State with special focus on those areas which have remained neglected so far. This was stated by the Chief Minister Jai Ram Thakur while addressing a delegation of BJP Mandal Rampur of Shimla district led by Chairman HIMCOFED Kaul Negi which met the Chief Minister here today.

Chief Minister said that the State Government during the last four years has ensured that Rampur area emerges as a model in matter of development in the State. He said that the Government was also ensuring that all the developmental projects being implemented in Rampur area were completed within the stipulated time period, so that people could avail benefits from these projects.

Jai Ram Thakur urged the party workers to work in unison to ensure that the BJP candidate from this Assembly Constituency wins in coming State Assembly elections. He said that the people of the country have completely rejected the Congress Party and the Party has virtually become a one family party. He said that the people of the four states have once again reposed full faith in the Central and State BJP leadership and has won in four states in recently held Assembly elections.

Chairman HIMCOFED Kaul Negi thanked the Chief Minister for reposing faith in him and assured him that the BJP would surely perform better in the coming Vidhan Sabha elections.

Jal Shakti Minister Mahender Singh Thakur and other leaders were also present on the occasion.