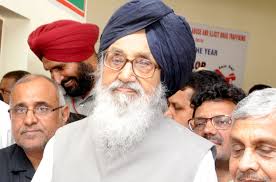 Strongly refuting her allegations against  Chief Minister Capt Amarinder Singh of denigrating the supreme Sikh institution, Mr Bajwa called upon her to first go through recent history of the Akali Dal spanning just the last 30 years to know the role of her family in general and that of Mr Badal in particular that has been treacherous and anti-Sikh. Mr Badal destroyed every Sikh institution to pave the way for the ascendency of his family in the religio-political domain. For the Badal family, personal interests dictate its politics rather than the welfare of the people.

He referred to unabashed defiance of Akal Takht at the time of celebrations of tercentenary of the Khalsa in April 1999, the first ever such festivities. He recalled Mr Badal violated the Hukamnama issued by then Akal Takht Jathedar Bhai Ranjit Singh on December 31, 1998 directing all Akali factions to jointly organise the tercentenary. It was Mr Badal who violated that edict. Bhai Ranjit Singh was later sacked unceremoniously by the SGPC on the directive of Mr Badal.

He said earlier in 1994, Mr Badal confronted then Akal Takht Jathedar Prof Manjit Singh when he summoned him to appear on May 6. He said Mrs Badal should go through entire record of the then developments on the issue of Akali unity.

Mr Bajwa said the examples were numerous and the Jathedars of Akal Takht were appointed and removed to serve the interests of Badal family that still controls the SGPC. He referred to Giani Puran Singh and Giani Joginder Singh Vedanti in this regard.  Giani Vedanti was removed on the issue of dilution of the original Nanakshahi  calendar.

He said he was willing to provide each and every detail of defiance of Akal Takht by Mr Badal and his only concern has been his power politics at the cost of the state, the Sikhs and the Sikh institutions.

He pointed out that in the contrary, Chief Minister Capt Amarinder Singh  had always bowed his head to every directive from Akal Takht and this was a matter of record and not some hollow claim.

He said Mrs Badal was in the habit of making baseless charges but the reality is that it is the Badal family that is synonymous with everything that is anti-Punjab and anti-Sikh as the only concern of this family to grab power and pelf for personal interests. He said the record speaks for itself.

MGNREGA wages pendency would be cleared within 2-3 days