Home Other Investigation News PANEX-21 provides a fresh impetus for creating a more cohesive mechanism to... 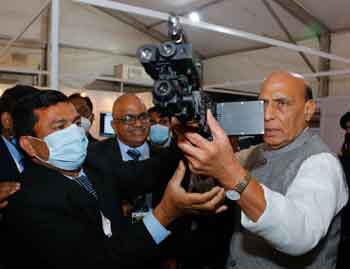 Raksha Mantri Shri Rajnath Singh witnessed a Multi-Agency Exercise (MAE) and inaugurated an equipment display on the second day of PANEX-21, a Humanitarian Assistance and Disaster Relief (HADR) Exercise for BIMSTEC member nations, organised at College of Military Engineering in Pune, Maharashtra on December 21, 2021. The Raksha Mantri witnessed demonstration of the capabilities of the Indian Armed Forces to launch swift, coordinated and incremental relief efforts in case of occurrence of any natural calamity in a particular region. The exercise saw a coordinated display of rescue and relief efforts by Indian Army, Navy and Air Force. In simulated disaster conditions, the synergised application of resources of the Armed Forces and other premiere disaster relief agencies of the country resulted in rescue of the stranded people as well as early restoration of essential services and opening of all lines of communications.

The equipment display, organised in association with Federation of Indian Chambers of Commerce & Industry (FICCI), is aimed to showcase the niche industrial capabilities and capacities of the Indian industry on disaster relief operations. Many innovative solutions, capabilities and range of products to assist government agencies in planning, preparation and conduct of HADR operations were demonstrated to the delegates of member nations of BIMSTEC (Bay of Bengal Initiative for Multi-Sectoral Technical and Economic Cooperation). A compendium of the products was also released by Shri Rajnath Singh on the occasion.

In his address, Shri Rajnath Singh termed BIMSTEC as one of the most important and closely-knit group of countries which has the potential to build a symbiotic partnership amongst like-minded nations by strengthening existing civilisational bonds.Lauding the member nations for standing by each other during natural calamities, he said, the PANEX-21 provides a fresh impetus for creating a more cohesive mechanism to respond to the HADR challenges in the region.

The Raksha Mantri exuded confidence that the exercise will facilitate improved coordination for meeting future challenges related to cyclones & earthquakes and threats like COVID-19.“Efforts by a nation directly affected by natural disaster, may quite understandably fall short due to the huge magnitude of such disasters. Thus, a multilateral effort, involving partners in Bay of Bengal region, will act as a force multiplier in pooling-in resources and orchestrating relief measures. It will accelerate the process of providing relief to people who are already distressed due to the natural disaster,” he said.

Shri Rajnath Singh reiterated India’s vision for the Indian Ocean region (IOR), which is based on the concept of SAGAR (Security and Growth for All in the Region), articulated by Prime Minister Shri Narendra Modi. He called for deepening economic and security cooperation in the littorals; enhancing capacities to safeguard land and maritime territories; working towards sustainable regional development; blue economy and promoting collective action to deal with non-traditional threats like natural disasters, piracy and terrorism. He said, while each of these elements requires equal attention, developing an effective response mechanism to address humanitarian crisis and natural disasters is one of the most important pillars of SAGAR.

The Raksha Mantri praised the Indian Armed Forces and Indian Coast Guard (ICG) for incorporating HADR operations as one of the foremost elements in their vision and for being the first responder in IOR. He made special mention of the pivotal role played by the defence forces and ICGin the fight against COVID-19. This commitment is reflected equally in the performance of the Armed Forces of each of the partner countries in the Bay of Bengal region, he added.

On the COVID-19 pandemic front, Shri Rajnath Singh stated that such calamities demand very specific resources which need to be moved to areas facing an emergency in a short span of time. He emphasised on the need for seamless information sharing mechanism at the regional level, establishment of protocols for moving responders&material and creating requisite capacities on the basis of country specific needs.

The Raksha Mantri mentioned about some notable HADR missions in IOR undertaken by India, including Operation Rahat in Yemen in 2015 – when India evacuated over 6,700 people; cyclone in Sri Lanka in 2016; the earthquake in Indonesia in 2019; Cyclone Idai in Mozambique; and flooding and landslides in Madagascar in January 2020; Oilspill in Mauritius in August 2020 and Oil tanker fire in Sri Lanka in September 2020 during the pandemic.

Shri Rajnath Singh also lauded National Disaster Response Force, State Disaster Response Forces and other agencies at Central, State and district levels for working bravely and tirelessly to provide relief to the people during disasters. He stressed that not only government agencies, but the participation of the private sector, local population and NGOs is critical for ensuring the success of HADR initiatives.

The Raksha Mantri hoped that the PANEX-21 will create the necessary groundwork for BIMSTEC nations to strengthen protocols, involving all stakeholders, to respond to future disasters. He called for consolidating and publishing a Standard Operating Procedure (SOP) to aid member states, expedite the conduct of disaster relief operations and save precious lives. “Each one of you, participating in this joint endeavour, brings a degree of expertise to the table. You also come with your own unique experiences. There is a need to synthesise these into a document that can be shared, circulated and be built upon for the benefit of member countries and subsequent endeavours of this kind,” he said.