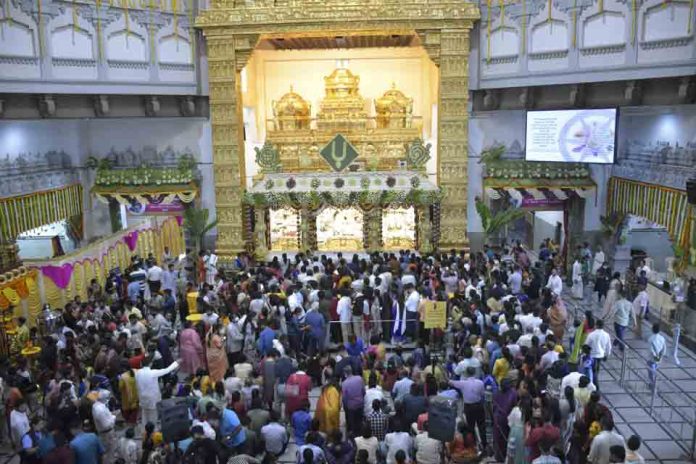 ISKCON Bangalore celebrated Sri Krishna Janmashtami – the divine appearance of Lord Krishna on August 18 and 19, 2022, at Hare Krishna Hill, Vaikunta Hill and Whitefield. This is the most awaited festival when scores of devotees havedarshan of Lord Krishna every year.Over 2 lakh people visited the temple on this auspicious occasion. 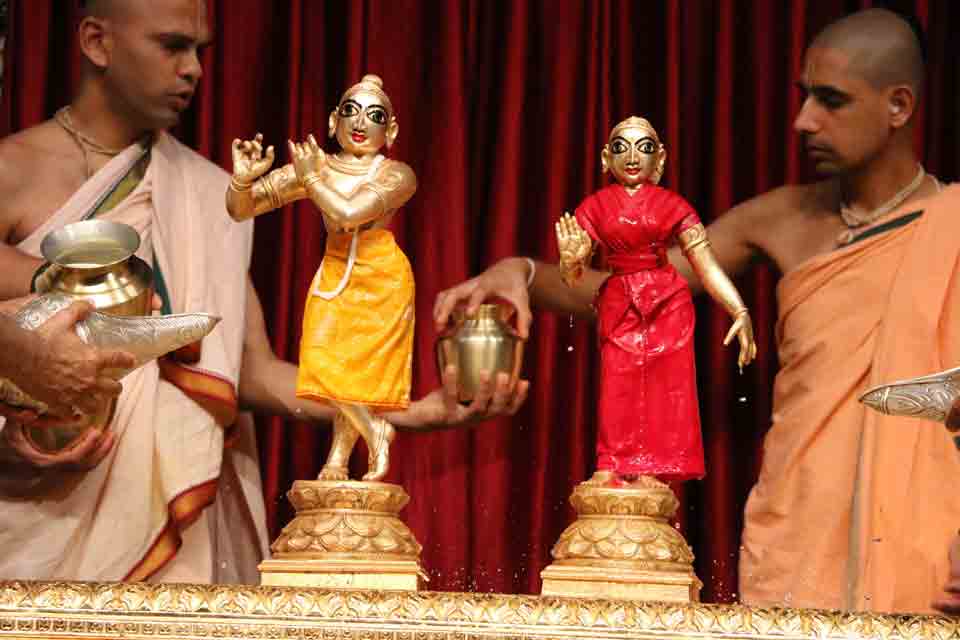 The deities received elaborateabhisheka, aratis, chappan bhog and jhulan seva on this occasion. Many varieties of special food preparations, including makhan mishri(freshly churned butter mixed with sugar crystals) were offered to Lord Krishna. Devotees performed cultural programmes like music and dance based on Lord Krishna’s lilas.Parents dressed their children as Krishna and Radhafor the festival.A special midnight abhisheka was performed,followed by a mahaarati to the deities.The programme was streamed live on the social media channels of ISKCON Bangalore. People from all over the world joined the celebrations online.

The newly inaugurated ISKCON Sri Rajadhiraja Govinda Temple at Vaikunta Hill also celebrated Janmashtami in a grand manner. This is the first stone temple of ISKCONand its architecture isinspired by the Tirumala temple. The Lokarpana of Sri Rajadhiraja Govinda Temple was performed by the former President of India, Shri Ram Nath Kovind, in June 2022.

Traditional sweets like laddu, burfi, mysore pak, holigeand savouries like murukku and nippattuwere prepared in huge quantities in the famed temple kitchens. Large-scale prasadam distribution was done at all three locations to the visitors on both days. Systematic arrangements were made to facilitate a comfortable darshan for all the visitors.

Shri V Somanna, Hon’ble Minister for Housing And Infrastructure Development,Government of Karnataka and Shri Tejaswi Surya, Member of Parliament for Bangalore South and National President of BJP Yuva Morcha, were among the dignitaries who visited the temple andoffered prayers to Lord Krishna.

A special video called “Dahi Handi –  Joyful Song & Dance of Lord Krishna” was released on YouTube. Dahi Handi is a traditional sport played in India to commemorate the sweet pastimes of Krishna, Balaram and Their cowherd friends stealing butter in Vrindavan. To celebrate the divine birth of Lord Sri Krishna, dancers performed a Dahi Handi within the precincts of the ISKCON temple in Bangalore.

Sri Madhu Pandit Dasa, President, ISKCON Bangalore,said, “Sri Krishna Janmashtami is a  major festival celebrated all over India with great joy and devotion. I amglad to see lakhs of peoplevisiting our temples, eagerly having the darshan of the Lord and engaging in various spiritual activities.

We conduct manyprogrammes for people of all age groups round the year. I invite everyone to participate actively and benefit from thesespiritually, intellectually and emotionally enriching experiences. I pray to Lord Krishna to bless us allwith good health, happiness and devotion.”

Mukesh Ambani said that he is very happy to visit Tirumala

Shankaracharya Swaroopanand Saraswati passed away at the age of 99

Apply For Instant Personal Loan Without Visiting The Bank