Home Other Enviroment Our planet’s health depends upon our choices and our actions: Vice President 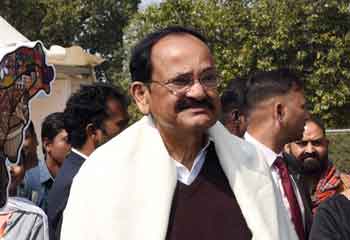 INVC NEWS
New Delhi ,
The Vice President, Shri M Venkaiah Naidu today called upon people to become environmentally conscious and adopt sustainable lifestyles in the time of climate change. It is high time that we make amends to bring the desired change in the health of our planet, he added.

The Vice President today visited the Forest Research Centre for Coastal Ecosystem (FRCCE) in Visakhapatnam and inaugurated the institute’s Marine Interpretation Unit created to disseminate knowledge on the marine environment and to work with coastal communities.

Later in a Facebook post, he recounted his experience of his visit to the centre and wrote that the display units in the Marine Interpretation Unit showing various wood samples at progressive stages of degradation were very informative. Shri Naidu was also apprised of the bird diversity of Eastern Ghats as well as species of birds associated with mangroves along the 114 KM long coastline of the Visakhapatnam district.

The Centre is the lone establishment in the country for research on timber protection under seawater in its total perspective. Shri Naidu added that he was happy that the FRCCE was conducting research on forest biodiversity and forest genetic resources management with respect to mangroves and coastal ecosystems of East and West coast. “Their research work on the mangrove ecosystem as well as biodiversity of Eastern Ghats is all the more critical in the time of ecological degradation and climate change,” he added.

Shri Naidu expressed his happiness that the centre has distributed 100 preservative-treated catamarans made of perishable timber to the fishermen of Andhra Pradesh and Tamil Nadu as a measure towards alleviating poverty. He reiterated that “the ultimate aim of science is to bring happiness and make people’s lives better.” The Vice President lauded the centre for the good work that was being done there for the benefit of coastal communities.