Our neighbor is a living example of financial mismanagement 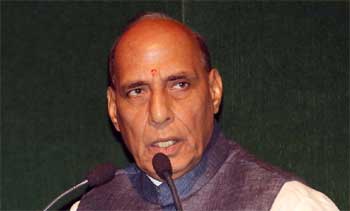 INVC NEWS
New Delhi,
Raksha Mantri Rajnath Singh today emphasised on the importance of financial prudence in an emerging economy like India, saying that any mismanagement like “in our neighborhood” can lead to fiscal chaos. In his address at the annual day celebrations of Defence Accounts Department (DAD), Ministry of Defence, Raksha Mantri said, “Our neighbor is a living example of financial mismanagement”. He said, excessive militarisation and focus on wrong policies in the neighborhood has led to a situation where a country could be blacklisted by international agency, Financial Action Task Force (FATF) for terror financing and its Prime Minister is struggling to arrange even for a plane to attend a global event.

Shri Rajnath Singh said, national security has today become a multi-dimensional concept, with economic strength, energy, food security and environmental protection among others being its key dimensions. Asserting that the Government is sensitive towards adapting to the changing environment, Shri Rajnath Singh assured that all barriers that come in the way of development will be removed. He said, he is interacting with the Armed Forces, scientists and defence experts in different parts of the country to understand their working and find ways to improve them. He emphasised on positive interpretation on rules to avoid delays in government projects, keeping in mind the welfare of jawans working in far-flung areas.

“There is a need to institutionalise the outcomes of successful models and work on the failures of the unsuccessful ones”, Raksha Mantri said. He stressed on harnessing best practices and convert them into ‘standard operation protocol’.

Declaring that employees of Ministry of Defence are his family, Raksha Mantri lauded DAD for efficiently accounting and utilising the huge Defence Budget and assuring that the soldiers receive their entitled financial benefits within stipulated time. He appreciated the Online Jet-Fuel Accounting System (OJAS) developed by a team of DAD, under which the bill payment of IOCL has been digitised using e-billing system. He said, Rs. 21 crores saved from the system in the first year itself could be utilised for preparing a road map for Oil PSUs and other components for MoD.

Shri Rajnath Singh appreciated the efforts of the department, especially for more than 32 lakh pensioners and in facilitating faster financial decision making. He hailed DAD for setting up a Call Centre for Defence Pensioners as well as Pension Adalats in remote areas. “In 2018-19, 19 Defence Pension Adalats were organised. I am extremely happy to note that the employee satisfaction in those adalats was 99.75%”, he said. Raksha Mantri stressed on devising a mechanism, under Digital India, where all problems are dealt automatically with full sensitivity and pensioners do not have to go from pillar to post in this regard.

Shri Rajnath Singh expressed confidence that a Comprehensive Pension Package System for defence pensioners, to be rolled out next year, will further increase the employee satisfaction as all pension related problems will come under one digital platform. He praised the Defence Accounts Department for implementing One Rank One Pension (OROP) with high professionalism.

In his address, Raksha Rajya Mantri Shri Shripad Naik highlighted the history of the department and lauded its expansion with changing times and varying needs.

Shri Rajnath Singh also gave away Raksha Mantri Excellence awards for employees of the department showing exemplary performance standards. This year, the awards were given to a team of Principal Controller of Defence Accounts (PCDA), Air Force, New Delhi for Online Jet Fuels Accounting System (OJAS); team of National Academy of Defence Financial Management (NADFM), Pune for GyanSudha – an e-learning & examination portal; and a team of PCDA, Allahabad for Revision of Pension for Pre-2016 Defence Pensioners. A statistical Handbook was also released on the occasion.

Defence Accounts Department is one of the oldest departments under Government of India. It is responsible for complete finance and internal audit functions not only for defence service viz Army, Navy & Air Force but other related organisations like DRDO, Ordnance Factories, Border Roads, Coast Guard and the canteen stores departments. The department has presence across the length and breadth of the country through its more than 11,000 offices at 250 locations.
Read the full article
Tags: New Delhi Ministry of Defence Financial Action Task Force invc news rajnath singh INVC NEWS New Delhi Raksha Mantri FATF Raksha Mantri Rajnath Singh Defence Accounts Department DAD