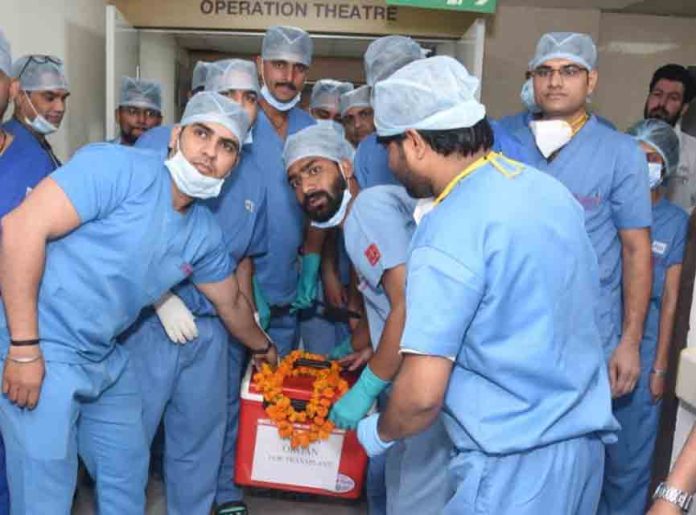 There is a wide gap between patients who need transplants and the organs that are available in India. 1.8 lakh people suffer from renal failure every year

The family of a 57-year-old male, who was declared brain dead at Manipal Hospital, Jaipur, on Saturday, took the brave decision of donating his heart, liver, and kidneys. The organs were allocated by the National Organ & Tissue Transplant Organization (NOTTO). One kidney was transplanted into a 37-year-old female at Manipal Hospital Jaipur and the other was transported to SMS Medical College. His liver was taken to the Mahatma Gandhi Hospital, while his heart was transferred to the Eternal Hospital in Jaipur via the green corridor. This was the second cadaver transplant done in the last 15 days at Manipal Hospitals, Jaipur.

Dr. Vaibhav Vaishnav, HOD – Critical Care Department, Manipal Hospital, Jaipur “The patient was a resident of Sikar and was admitted to a local hospital after a major accident. He was later referred to Manipal Hospitals, Jaipur on the 27th of August 2022, where he was put on a ventilator and primary treatment was done to save his life. Unfortunately, after a few hours, he was declared brain dead even after sustained efforts by the team of doctors. After we counselled the family about the patient’s condition, they took a big step of donating his heart, liver, and both kidneys. We would like to express our sincere gratitude to the donor’s family for their decision to support the noble cause of organ donation.”

Mr. Ranjan Thakur, Hospital Director, Manipal Hospital, Jaipur said, “Organ donation not only helps saving lives of those in need but also the people around them as well. The 57-year-old army man had served the Indian army for 17 years and even after his deaths, he served the nation and saved countless lives. We salute the courage of the family in taking this big decision of donating his organs. We are also thankful to the police department of Jaipur for their support in creating a green corridor which has saved the lives other people. With a slow but steady increase in the cause of organ donation across the country, there is hope for many lives to be saved with available donor organs.”

There is a wide gap between patients who need transplants and the organs that are available in India. 1.8 lakh people suffer from renal failure every year, however only 10,000 renal transplants are done. An estimated 25,000 to 30,000 liver transplants are needed annually in India but only about thousand five hundred are performed. Similarly, of several thousand who suffer from heart failure, only 200 get a heart transplant. In the case of Corneas, about 25,000 transplants are done every year against a requirement of 1 lakh. It is important that more awareness around organ donation must be created so that more lives can be saved.