Home Health Organ donation is one more attempt given by Nature to be altruistic... 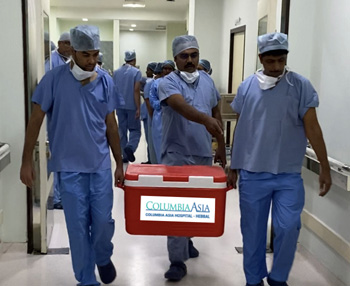 INVC NEWS
New Delhi ,
“Jeete ji Raktdaan, Marne ke baad Angadaan: This should be the motto of our life.” This was stated by Dr. Mansukh Mandaviya, Union Minister for Health and Family Welfare today while addressing the 12th Indian Organ Donation Day in the presence of Dr. Bharati Pravin Pawar, Union Minister of State for Health and Family Welfare.

The event, meant to celebrate the gift of life given by the deceased donors to the transplant recipients was inaugurated by the Union Ministers to promote organ donation at a time the country’s demand for organ replacement far exceeds organ donations. The occasion felicitated the members of families of deceased donors who gave their consent in a time of grief.

Dr. Mandaviya explaining the importance of organ donation said, “Our culture puts emphasis on ‘Shubh’ and ‘Laabh’ where individual well-being is rooted with the greater good of the community. It is my honour to be participating in 12th Indian Organ Donation Day, a day which is celebrated for the noble cause of organ donation. Since the year 2010, Indian Organ Donation Day is being celebrated every year to commemorate the contributions made to society by deceased donors and their families.

He spoke from his experience of a known organ donor called ‘Deepak’ from Jamnagar in Gujarat whose father resolved to give his assent to organ donation. He exhorted all people to not only pledge to donate their organs but also spread the word on the paucity of organs available for transplant in the country and inspire others to come forward. Calling for greater coordination, he commented that all of society, the doctors, aware citizens, the governments and even the media need to play their role actively to address organ donation hesitancy and increase organ donation across the country.

On the achievements of the network of organ donation, collection and replacement through the SOTTOs at State-Level, ROTTOs at Regional Level and NOTTOs at National Level, the Minister stated, “It makes me immensely proud to share that the total number of organ transplants done per year in the country has increased from 4990 in the year 2013 to 12746 in the year 2019 and India now ranks third in the world only behind USA and China as per the data available on the Global Observatory on Donation and Transplantation (GODT) website. Similarly, the organ donation rate has increased to about four times as compared to 2012-13. However we are still facing a huge gap between the number of patients requiring transplantation and the number of people who consent to donate their organs after death. Further, the organ donation and transplantation activities have been negatively impacted due to COVID-19 pandemic which we hope to leave behind soon.”

He also reminded his audience that society is fast changing and with the sanctity and preciousness of each and every life becoming visible to all, soon people who have committed ‘Angadaan’ will be viewed with the same respect accorded to those who give away hard earned wealth to charity.

Dr. Bharati Pawar delved into her experience in medicine to explain the helplessness of many individuals along with their families which gets addressed when an organ is donated and transplanted upon them. She said that this noble act is no less than the concept of ‘Amaratva’ espoused in our scriptures. “An organ donation is one more attempt given by Nature to be altruistic and give back to the society,” she added.

The Minister of State noted that in the recent visit of Prime Minister Shri Narendra Modi to Kolkata, he had warmly welcomed this act of an organ donor while interacting with him. She said, “National events such as the Indian Organ Donation Day where we recognize the selfless contribution made by deceased donors to healthcare and mankind re-instil our faith in humanity and encourage us to follow in the footsteps of these superheroes and pledge our organs to help fellow human beings suffering from end stage organ failure. The saying that a meaningful life lived is worth more than a long life still holds true and is exemplified by people who commit to donate organs.”

The Ministers gave away wards to encourage the exemplary performance by transplant professionals in our country: The State Organ and Tissue Transplant Organization (SOTTO) of Maharashtra won the award for the highest number of deceased donors transplantations while Regional Organ and Tissue Transplant Organization (ROTTO) for the Western Region was recognised for best performance.

As a part of generating awareness, students were invited to participate in poster competitions. The winners were also awarded at the event.

The event ended with Dr. Mandaviya leading everyone in pledging their organs after death to those in need.

The event was officiated by Dr. Sunil Kumar, Director General of Health Services. Senior officials of the Health Ministry were also present.