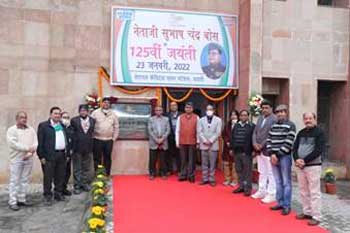 NTPC Stations have started its weeklong Celebrations for Netaji’s birthday which are marked by various online competitions like essay, drawing, painting, quiz etc among employees considering COVID restrictions. The theme of the competition is “Contribution of Netaji Subhash in the freedom movement.”

To imbibe the vision and ethos of patriotism from Netaji’s life and to express respect and gratitude to Netaji, an essay competition has also been organized for employees, spouse and children. The theme of the competition is “Contribution of Netaji Subhash Chandra Bose in freedom movement.”

NTPC KOLDAM organized a quiz and speech competition with Yuvak Mandal. The event was a success with children and youth participating enthusiastically in both the programs. Further to encourage and motivate the participants, various prizes were distributed to them.