NRF will provide a new direction to research

Speaking on the occasion, the Minister said that Prime Minister Shri Narendra Modi gives a special emphasis on research and has given a slogan Jai Jawan, Jai Kisan, Jai Vigyan and Jai Anusandhan. He said that research is need of the hour and through research we can shift to a new paradigm of development. He further said that the National Research Foundation (NRF) will provide a new direction to research in India.

He appealed to the researchers that the subject of research should relate to social concerns of the region so that benefits reach down the line to the last person. Today, behind the development of developed countries, there is a special contribution of the research done in the universities there and our educational institutions have to play the similar role in building a new India and he was confident that India will become World leader in every field by the efforts of these institutions.

The Minister said that the TechEx is a unique effort, which offers an excellent platform to the researchers to showcase their work and inspire them to do their best in their respective domains. He informed that as many as 50 models/prototypes under IMPRINT and 26 under UAY were showcased during the exhibition in addition to 142 posters. He further informed that some prominent among the exhibits were non-invasive and low-cost rapid TB diagnostics, artificial pancreas for closed loop blood glucose control of type-I diabetic patients, affordable cancer diagnosis/treatment, electric vehicle charger, remote healthcare delivery system for non-communicable diseases, low cost environment friendly fire detection and suppression system, air quality monitoring network system and detection of pesticides and insecticides in fruits and vegetables. He added that many of these products/prototypes are at the verge of commercial production.  Praising theTechEx program, organized jointly by DST and Human Resource Development Ministry, Shri. Nishank said that there should be more such programs which should increase the interest of people towards research in the country.

IMPRINT scheme was launched in November, 2015 with a view to providing solutions to the most relevant engineering challenges by translating knowledge into viable technology (products or processes) in 10 selected technology domains, namely health care, energy, sustainable habitat, nano-technology hardware, water resources and river systems, advanced materials, Information and Communication Technology, manufacturing, security and defence, and environmental science and climate change. 142 projects at a total cost of Rs.313.30 cr. were approved under the scheme. These projects are funded jointly by MHRD and the participating Ministry in the ratio of 50:50.

UchhatarAvishkar Yojana (UAY) was announced on October 6, 2015 with a view to promoting innovation of a higher order that directly impacts the needs of the Industry and thereby improves the competitive edge of Indian manufacturing. A total of 142 projects, including 83 in Phase-I and 59 in Phase-II) have been approved under UAY at a total cost of Rs.388.86 cr. UAY projects are funded jointly by MHRD, participating Ministries and the Industry in the ratio of 50:25:25. The scheme focusses on a viable industry-academic collaboration where industry shares a part of the cost of research.

Secretary, Department of Higher Education Shri R. Subrahmanyam, Secretary, Department of Science & Technology Shri Ashutosh Sharma, Directors of IITs at Delhi, Madras, Roorkee, National Coordinators of IMPRINT and UAY, PIs and Researchers from across Institutions and Industry Partners were present on the occasion. Students of Kendriya Vidyalaya as well as those from the engineering colleges affiliated to AICTE in Delhi and NCR region were also invited to witness the exhibition in order to motivate them to pursue research and contribute to the societal well-being.

Healthy India is the cornerstone in making New India 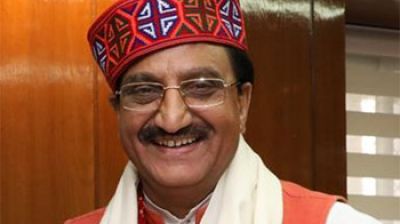 Extending internships to students from Jammu and Kashmir