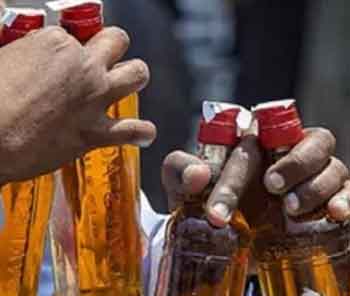 Now there will be no discount on liquor in Delhi

Liquor shops opened in Delhi on Tuesday after the controversy-ridden new excise policy got an extension of one month. On Monday, after a day of closure, twice the shops opened, then the shortage of liquor remained intact. In fact, after the extension of one month, the companies having license to retail liquor in six zones have returned their license to the department. With this, about 126 liquor shops will be closed in Delhi.

A total of 342 shops will now open in Delhi. Whereas till July 31, 468 shops were running in Delhi. When the shops opened on Tuesday of the undeclared dry day, more shops were empty. In fact, there was a situation of confusion among the companies having license about whether there would be extension regarding the excise policy. Because of this he did not buy any new stock. In the last days, due to the heavy purchase of liquor, there was not much mall in stock. The seller posted at the liquor shop on Janpath said that it was not yet known that the shop would open again. So now the stock will come from Wednesday. Similarly, people were coming for liquor at the shop located on Matiala Road of Uttam Nagar.

But very limited brands of alcohol were available. Liquor shops in Delhi have opened after expansion but the exemption has ended. Posters of no discount have also been put up in many shops on Tuesday. In which it was written that now there will be no exemption on alcohol. This poster was put up at the shop located on Matiala Road. Earlier, up to 25 percent discount was being given on liquor in Delhi. In many places, even more discounts were being given.

Coming down heavily on liquor mafia