Home Latest news Now the government goes to the citizens 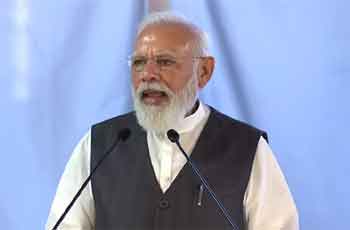 The Prime Minister, Shri Narendra Modi, dedicated 35 Pressure Swing Adsorption (PSA) Oxygen Plants established under PM CARES, across 35 States and Union Territories, in an event held at AIIMS Rishikesh, Uttarakhand today. With this, all districts of the country will now have commissioned PSA Oxygen Plants. Union Ministers, Governor, Chief Minister of Uttarakhand, State Ministers and healthcare professionals were present on the occasion.

Addressing the gathering, the Prime Minister noted the beginning of the holy festival of Navratri from today. He said Maa Shailputri is worshipped on the first day of Navratri. He remarked that Shailputri is the daughter of Himalaya. “On this day I am here, coming here to bow to this soil, saluting this land of Himalayas, what can be a greater blessing in life than this,” said the Prime Minister. He also congratulated the state for splendid performance in the Olympics and Paralympics. The Prime Minister stressed that his relationship network with the land of Uttarakhand is not only of heart but also of action, not only of essence but also of element.

Continuing with the significance that today’s date holds for him, the Prime Minister recalled that on this day 20 years ago, he got a new responsibility to serve the public. He added that his journey of serving the people, living among the people was going on for many decades, but 20 years ago today, he got a new responsibility as the Chief Minister of Gujarat. He also noted that the beginning of this journey coincided with the formation of the Uttarakhand state as he took over as the Gujarat Chief Minister a few months after that. He said he never imagined that he would, with the blessings of the people,  reach the position of the Prime Minister.  The Prime Minister expressed his gratitude to the people of the country and Uttarakhand as he entered the 21st year of this unbroken journey as head of the government.

Shri Modi expressed happiness that from the land where life-giving forces like Yoga and Ayurveda gained strength, today, oxygen plants are being dedicated.  The Prime Minister said the facilities India prepared in such a short timespan to fight the Corona pandemic, shows the capability of our country. Network of about 3000 testing labs were created from just 1 testing lab, before the pandemic. India has transformed from being an importer to an exporter of masks and kits. Facilities of new ventilators were made available even in remote areas of the country. India has made rapid and large-scale manufacturing of Made in India Corona Vaccine. India has implemented the world’s largest and fastest vaccination campaign. The Prime Minister said what India has done is a symbol of our determination, our service and our solidarity.

The Prime Minister said in normal days, India used to produce 900 metric tons of liquid medical oxygen a day. As the demand increased, India increased the production of medical oxygen by more than 10 times. He added that this was an unimaginable goal for any country in the world, but India has achieved it.

The Prime Minister remarked that it is a matter of pride for every Indian that 93 crore doses of corona vaccine have been administered. Very soon India will cross the 100 crore mark. He said India has shown the way to the whole world by building the Cowin platform that shows how vaccination is done on such a large scale.

The Prime Minister noted that till 6-7 years ago, only a few states had the facility of AIIMS, today work is being done to take AIIMS to every state. He said we are moving fast from 6 AIIMS to build a strong network of 22 AIIMS. It is also the goal of the government that there must be at least one medical college in every district of the country. He recalled that former Prime Minister Shri Atal Bihari Vajpayee had fulfilled the dream of the creation of Uttarakhand. Shri Atal Bihari Vajpayee believed that connectivity is directly related to development. Due to his inspiration, today work is being done for improving connectivity infrastructure in the country at unprecedented speed and scale, the Prime Minister said.

The Prime Minister said before the launch of the Jal Jeevan Mission in 2019, only 1,30,000 households in Uttarakhand had access to tap water. Today piped drinking water has started reaching more than 7,10,000 houses of Uttarakhand. That is, within just 2 years, about 6 lakh houses in the state have got water connections.The Prime Minister informed that the government is also working very seriously for the interests of every soldier, every ex-serviceman. He added that it is our government that fulfilled the 40 years old demand of our brothers from the armed forces by implementing One Rank One Pension.

After the inauguration of Mahakal Lok on October 11, Prime Minister Modi will come to Indore by road