North East should become the growth engine of country

Prime Minister laid the foundation stone for the water supply project in Manipur today through a video conference.

Speaking on the occasion, Prime Minister said that even as the country is fighting relentlessly against COVID-19, Eastern and North Eastern India had also to face dual challenges of heavy rains and floods which cost many lives and rendered many homeless.

Prime Minister said the Manipur Government made all the necessary arrangements during the lockdown and special arrangements for the return of migrants.

He said about 25 lakh poor in Manipur have received free food grains under the Pradhan Mantri Garib Kalyan Anna Yojana. Similarly, more than 1.5 lakh women in Manipur have been given the facility of free gas cylinders under the Ujjwala scheme.

Referring to the Water Supply Project, which is being implemented at a cost of Rs 3000 Crore he said it would reduce the water problems of the state and would be especially providing a huge relief to the women of the State. Shri Modi said that apart from Greater Imphal, the project would benefit 25 small towns and 1700 villages in the state. The project has been designed keeping in mind the needs of the next two decades.

Prime Minister recalled that last year Jal Jeevan Mission was launched in the country with a target of providing piped water to more than 15 crore houses and today about one lakh water connections are being installed every day in the country, with the participation of the people.

Prime Minister said Ease of Living is a necessary prerequisite for a better life and is the right of all including the poor.

He said steps have been taken in the last 6 years, at every level, in every field, to improve the ease of living, especially for the poor. He expressed happiness that today the whole of India including Manipur is free from open defecation. He said that LPG gas has reached the poorest of the poor, every village is connected by good roads and pucca houses are being provided to the homeless.

Prime Minister said that work is on a mission mode to provide safe drinking water to every household.

Shri Modi said Better Life is also directly linked to connectivity.He said the connectivity of North East is essential for a secure and sure Atmanirbhar Bharat. He said this would give a fillip to India’s Act East Policy and that it would also provide a gate way to country’s travel and tourism sector.

He said modern infrastructure is being developed in the North East along with Roadways, Highways, Airways, Waterways and i-ways as well as gas pipelines. In the last 6 years, thousands of crores of rupees have been invested in the development of infrastructure, in the entire North East.

Prime Minister referred to the more than 20 national waterways including the ones in the North East, which would provide a seamless connectivity.

Prime Minister said that today the youth and people of North East are opting for development and progress and shunning violence. He said blockades in Manipur are now a part of history.

Shri Modi said that people in Assam, Tripura and Mizoram have now abandoned the path of violence. He said the Bru- Reang refugees are moving towards a better life.

Referring to the great potential of Bamboo industry of the North East and its capacity to develop organic products, Prime Minister said that clusters are being developed for value addition and marketing of local products under the AatmaNirbhar Bharat campaign.

He said Agro Start-ups and other industries will benefit from these clusters. He said that the North East has the potential to replace India's Bamboo Import with Local Production. There is such a huge demand for incense sticks in the country, but still we import billions of rupees worth incense sticks. PM said that hundreds of crores of rupees are being invested under the National Bamboo Mission for Bamboo farmers, artists associated with handicrafts and other facilities. This will benefit the youth of the North East, the start ups here.

The  Prime Minister said that many institutes are now being built in the North East for health, education, skill development, start-ups and other training. With the launch of the Sports university  and a world class stadiums, Manipur will become a major hub for the country's sports talent. 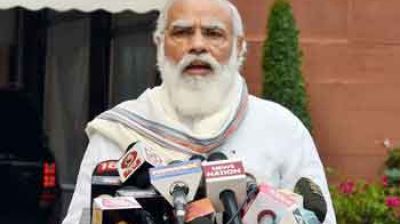