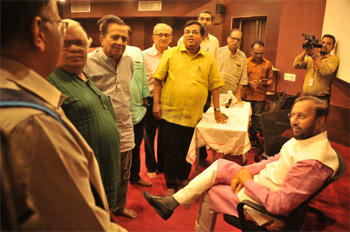 INVC NEWS
New  Delhi,
The National Film Heritage Mission is an important initiative of the I&B Ministry to preserve and conserve country’s cinematic heritage. The Government is committed towards its implementation in a time bound manner. Shri Prakash Javadekar, Minister of Information and Broadcasting and Minister of Environment, Forest and Climate Change, mentioned this during his visit to National Film Archive of India, today.

Shri Javadekar reviewed the Ministry’s prestigious project of ‘National Film Heritage Mission’, and various activities undertaken under this project. Shri Javadekar after review said “film condition assessment work of nearly 1.32 lac film reels has been completed and the preventive conservation work is underway. The work on digitization of film reels will commence soon.” Shri Javadekar further added, “the Government is setting up new preservation facilities (vaults) at 3 acres of land. Also, NFAI will have a dedicated children film club, benefiting children of different age groups.” While mentioning about the restoration of Jaykar Bunglow, Shri Javadekar said “the restored Jaykar bunglow will have a new digital library and personal viewing space for film researchers”.

On the sidelines of the review meeting Shri Javadekar also met with film federation personalities and addressed their requests. The broader objectives under NFHM are to undertake film condition assessment and preventive conservation of around 150,000 film reels, Digitization of around 3500 films, picture & sound restoration of around 2000 landmark films of Indian cinema, construction of preservation and conservation facilities (vaults), training and workshops and creating a comprehensive Web-based End to End IT solution.