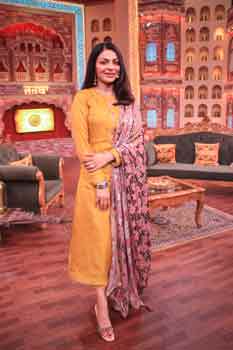 INVC NEWS
Chandigarh,
Pollywood Queen ‘Neeru Bajwa’ has been ruling audience hearts for more than two decades now. From participating in reality shows to being part of TV and then the biggest superstar of the Punjabi film industry, Neeru Bajwa’s screen presence has made people skip their heart beats.

Adding another feather to her cape, Neeru Bajwa is all set to be a host for Zee Punjabi’s upcoming show ‘Jazbaa’.

Jazbaa will be a chat show with Neeru Bajwa which will celebrate the unsung heroes who were selfless in their endeavours.

The show that aims to bring the great achievements of people which often go unnoticed in the limelight in order to encourage them to achieve their goals, no matter what comes in between. The show also aims to empower and educate citizens with information about the country and urge them to take action.

Other details regarding the show ‘Jazbaa’ will be revealed soon.