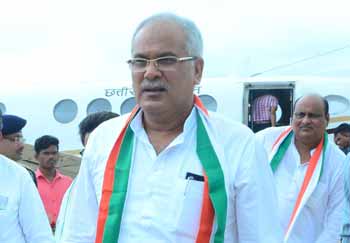 In the Cabinet Meeting chaired by Chief Minister Mr. Bhupesh Baghel today at his residence office, following important decisions were taken. Chhattisgarh Goovernment has decided to launch a new health scheme to provide quality treatment facilities to all the citizens of the state.

2. Chief Minister Special Health Support Scheme- for the diseases that are not covered under the schemes, for the beneficiary whose name is not on the list, or in case if the financial aid provided under the new scheme is not sufficient for treatment, Cabinet has decided to launch Chief Minister Special Health Support Scheme as an expansion of Sanjeevani Sahayta Kosh is being expanded to support those families. Under this scheme, medical facilities worth Rs 5 lakh to 20 lakh will be provided to each beneficiary family on recommendation of Chief Minister.

Chhattisgarhi Song written by Dr Narendra Verma- “Arpa Pairi Ke Dhar Mahanadi hai Apaar” was approved to be declared as state song.
Action plan for concession in prices of unsold residential and commercial building built under various schemes, concession in penalty interest and capital interest on balance amount of rented residential buildings under Chhattisgarh Housing Board’s self-funded rent housing schemes was approved. Under this action plan, prices of the buildings will be reduced by 15-20% on the basis of the duration for which the said unsold residential or commercial property has been vacant since the time of construction.

Cabinet has decided to start a new sector in Chhattisgarh District Mineral Trust Rule-2015 for ensuring availability of houses, daily-use goods, clothes for women and children, etc. for mining affected people. Maximum 5% of the amount received for priority sectors can be utilized for aforementioned works.

Cabinet has decided to allot free land to AIIMS, Raipur in Nava Raipur, Atal Nagar. Draft of the MoU to be signed by NRDA with AIIMS Raipur for allotment of land to be allotted in Sector-40 was approved.

Cabinet has decided to utilize the rice available with Chhattisgarh State Civil Supply Corporation in various schemes conducted by State and Central Government’s departments and organizations.

Necessary amendments to be done in Chhattisgarh State Rural and Other Backward Area Development Authority Fund Rule-2012 were approved and new works such as education, health, nutrition etc were included.

Cabinet has decided to establish Gem and Jewelry Park in Raipur city.

Decision to halve the existing entrance fee of Nandanvan Jungle Safari Nava Raipur has been taken. Free Entry for visitors of age below 12 years and for disable people.

CM is a well-wisher of the journalists of the state

The sacrifice of these legendary patriots will always inspire us

Bastar’s unique and rich culture is the identity of Chhattisgarh

Women always held a high position in the culture of Chhattisgarh