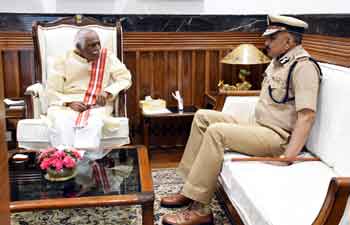 INVC NEWS
Haryana,
Haryana Governor Bandaru Dattatraya has stressed the need for involving public and private universities and other educational institutions in wiping out the crime of drug trafficking from Haryana. Shri Dattatraya was interacting with Shri Shrikant Jadhav, ADGP, State Narcotics Control Bureau, who made a courtesy call on Shri Dattatraya at Raj Bhavan on Tuesday.

Shri Dattatraya said that youths will be effective in checking the use of illegal substances and preventing drug trafficking effectively. He said the officers of the Bureau should co-ordinate with educational institutions and make youths aware of drug prohibition in rural and urban areas.

The Governor said that the university administrations can do a better role in preventing drug trafficking and illegal use through their own information system, social media and other means of media including street plays, rallies and other such activities. Students studying in universities can create awareness against drugs in urban, village and other far flung areas by giving effective messages through the above media tools. He said that NCC Scouts and students associated with NSS can play a more important role. Along with this, the cooperation of Red Cross and other social, government and non-governmental organizations can also be taken.

So far, branches of Narcotics Control Bureau have been established in 12 districts. These districts include Hisar, Fatehabad, Karnal, Sirsa, Kaithal, Ambala, Panchkula, Kurukshetra, Faridabad, Rohtak, Gurugram and Rewari. He said that the branches established in all the districts have been fully activated which are working effectively on the basis of information. He informed that toll free number and mobile number-9050891508 have also been set up at the headquarters, Madhuban, level to give information related to drugs.

A sub-inspector level officer has been made in-charge of toll free, who will immediately inform the units of the respective districts. Any person can give information on toll free number. The name of the person giving information will be kept strictly confidential.

Shri Jadhav further informed that the cooperation of Panchayati Raj Institutions would also be taken to tighten the noose on Narcotics cases.

The campaign will be conducted at the village level by the Bureau after meeting with the representatives of all Panchayati Raj Institutions. Apart from this, the cooperation of government and non-government organizations will also be taken. An organization named ‘Prayas’ has started working in association with the Bureau.

Shri Jadhav said that so far meetings have been held with chemist associations and medical officers and voluntary organizations in many districts of the state and all have been asked to cooperate with the bureau in any kind of smuggling and illegal use of drugs. So that Haryana can be made completely drug free.