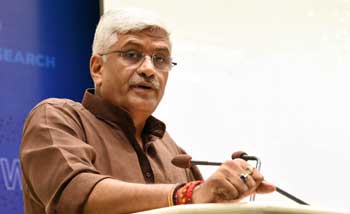 INVC NEWS
New Delhi,
Government of India will soon come out with an updated version of  National Water Policy to effect key changes in Water Governance Structure, Regulatory Framework, besides setting up of a National Bureau of Water Use Efficiency. Speaking at the valedictory session of the 6th India Water Week-2019 here, Union Minister for Jal Shakti Shri Gajendra Singh Sekhawat said that hydrological boundaries rather than administrative or political boundary should become part of the water governance structure in the country. He said, for this consensus building among the states within the Constitutional framework is a necessary pre-condition.

Shri Shekhawat said said that water conservation along with water-harvesting and judicious and multiple use of water are key to tackle the water challenges in India. Calling for rejuvenation and revitalization of the traditional water bodies and resources through the age-old conservation methods, the Minister underlined the need for dissemination of modern water technologies in an extensive fashion. Dwelling on the idea of Water Trade, Shri Shekhawat said that water surplus states like Chhattisgarh can gain by sharing the resource with the deficient ones. He also asked the States to collect data on water resources and to share the same with others with an open mind.

In his address, the Minister of State for Jal Shakti Shri Rattan Lal Kataria said that demand side management of water should get priority over the supply side management and called for massive conservation of the scarce resource. Underlining the need for recycle and reuse of water, he said that Integrated Water Management is a tool for poverty reduction and sustainable economic development.

Speaking on the occasion, Secretary, Department of Water Resources, River Development and Ganga Rejuvenation Shri U.P Singh said that National Water Policy of 2012 needs major updation in the light of new challenges especially the ill-effects of climate change. Batting for policy changes for giving incentive to crops using less water, Shri Singh said that Participatory Ground Water Management should be promoted in a big way to maintain quality and sustainability.

India Water week was inaugurated by the President Shri Ram Nath Kovind on 24th of this month with a theme of “Water cooperation: Coping with 21st Century Challenges”. Japan and European Union were associated as partner countries for this mega event.

Ministry of Jal Shakti has been organizing India Water Week since 2012 as an international event to focus on water related issues. Five editions of India Water Week have been organized so far.  Water Resources Ministers of various States have attended the Inaugural Function. About 1500 delegates from India and abroad participated in this event, which included about 63 delegates from 28 countries.

The event was divided into Seminars (15 nos.), Brainstorming Sessions (4 nos,), Panel Discussions (12 nos.) and Special Session (6 nos.). Apart from this, an Exhibition showcasing the technologies and solutions in water resources sector was also organized at Indira Gandhi National Centre for Arts (IGNCA).  About 62 organizations displayed their work in the exhibition. Many reputed National and International Organizations, Research Institutes, Educational Institutions and NGOs from water resources, agriculture, power sectors participated in the event to share their knowledge and experience in the sector.

Coal dispatch to power plants will be further increased