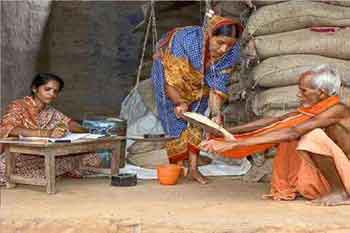 Under the Targeted Public Distribution System (TPDS), the electronic Point of Sale (ePoS) devices at the Fair Price Shops (FPSs) are operated by the FPS dealers. Further, to ensure regular delivery of subsidised foodgrains to the differently abled and old-age National Food Security Act (NFSA) beneficiaries, with no other adult member in the household and who are not in position to visit the FPSs, all States/UTs are advised to implement mechanisms for special dispensation of foodgrains to such beneficiaries, either through home-delivery or through their nominated persons.

Under NFSA inter-alia the operational responsibilities of inclusion and exclusion of households/ beneficiaries rests with the respective State/UT Governments. The addition and deletion of ration cards is a continuous process, wherein the States/UTs regularly review their list of ration cards/beneficiaries to identify and weed out potentially ineligible, duplicate or bogus ration cards after proper verification, which may also include field/ door to door verification and to include other genuinely eligible and left out households/beneficiaries, which may also include eligible tribal and poor families/ persons, up to their respective limits of NFSA coverage. Accordingly, due to use of information technology for TPDS reforms, digitization of ration cards data, de-duplication process, permanent migration, deaths, identification of ineligible/duplicate/fake ration cards, etc. the States/UTs have reported the cancellation of about 4.28 Crore such bogus ration cards during the period 2014 to 2021 so far.

Further, non-linking of Aadhaar with ration cards is not a ground for the cancellation of ration cards. The Department has extended the timeline given to the States/UTs, under the Notification dated 08/02/2017 (as amended from time to time) issued in exercise of Section-7 of the Aadhaar Act 2016, for completing the Aadhaar seeding of ration cards up to 31st December 2021. Until then, all States/UTs have been advised that no genuine beneficiary/household shall be deleted from the list of eligible ration cards/ beneficiaries and shall not be denied their entitled quota of foodgrains under NFSA only for want of Aadhaar number or only on the ground of not possessing an Aadhaar number, failure of biometric authentication due to network/ connectivity/ linking issues or any other technical reasons etc.

This information was given by the Minister of State for Consumer Affairs, Food and Public Distribution Ms.Sadhvi Niranjan Jyoti .