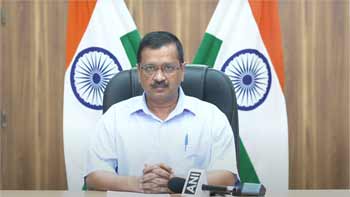 Different governments are celebrating this at their own level. He said that I want to appeal to the people that on the eve of our Independence Day on 14th at 5:00 pm every Indian should sing the national anthem with the tricolor in his hand. Along with this, he has said that we are going to distribute the tricolor among the people on a very large scale regarding this program in Delhi.

Kejriwal said that more than 25 lakh tricolors will be distributed in Delhi. With this, he said that those who can make or buy the tricolor on their own, they must do so. Tricolor will be given to every child in government schools so that they can take it to their home and sing the national anthem with the family with the tricolor in hand. Put the tricolor at your home.

Tricolors will be distributed over the street, mohalla and chowk. He repeatedly reiterated that in the evening on the 14th, you must go to the national anthem with the tricolor in your hand and apply the same wave at your home. Along with this, he said that when we will sing the national anthem with the tricolor in hand, then at the same time we will have to take a pledge that we will make India the most powerful and best nation in the world.