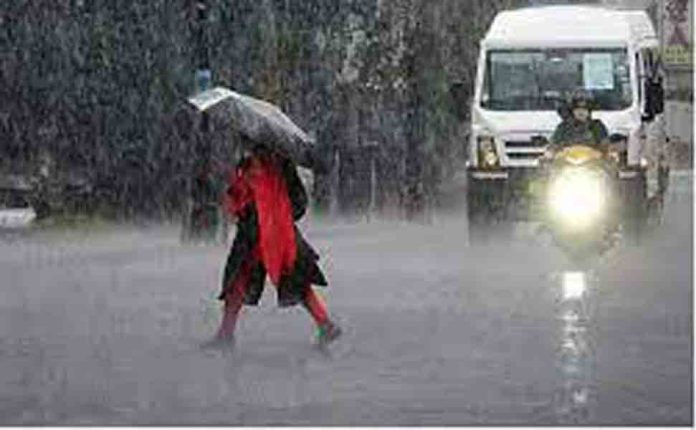 Southwest Monsoon is going to be active again from June 26 and will reach Northwest India covering remaining parts of Gujarat, Madhya Pradesh and Bihar. According to the Meteorological Department, if the conditions remain favorable, from June 30 to July 6, the monsoon will cover the entire country. According to the Meteorological Department, rain with thunderstorms is expected in the national capital on June 27, while there is a possibility of rain for four consecutive days from June 28.

Heavy rain and thundershowers are very likely over Coastal Karnataka, Konkan Goa, Kerala, Mahe and Lakshya Island during the next 5 days. Light rain over Interior Karnataka, Madhya Maharashtra and Marathwad and Gujarat, Telangana, Andhra Pradesh, Yemen and Tamil Nadu , Puducherry and Karaikal are expected to receive scattered rain. During this, there is a possibility of heavy rain and thundershowers in the areas of Bihar, Jharkhand, West Bengal adjoining the Ganges. There is a warning of heavy rain at isolated places over Odisha on June 26, 28 and 29, over Vihar during June 26-29 and Jharkhand on June 28-29. There is a possibility of rain and thundershowers during 26 to 29 June in Uttarakhand, East UP and on 28 and 29 June in Himachal Pradesh and West Uttar Pradesh.

Along with this, there is an alert of the Meteorological Department that there will be torrential rains in many districts including the capital Lucknow. Also, there is every possibility of strong winds and lightning strikes. The Meteorological Department has issued a yellow alert for thunder and lightning in 25 eastern districts of Uttar Pradesh. These include Kushinagar, Maharajganj, Deoria, Gorakhpur, Ballia, Mau, Ghazipur, Chandauli, Sonbhadra, Mirzapur, Varanasi, Prayagraj, Jaunpur, Azamgarh, Sant Kabir Nagar, Ambedkar Nagar, Basti, Ayodhya, Gonda, Barabanki, Lakhimpur Kheri, Sitapur, Bahraich. , Shravasti, Balrampur and Siddharth Nagar. PLC/GT