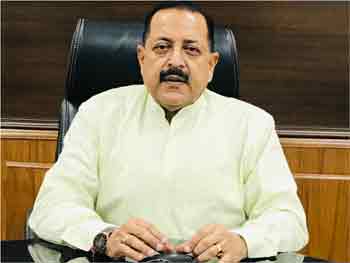 INVC NEWS
New Delhi,
Various Scientific Ministries and Departments of Government of India are contributing in the efforts of India in making the world a better and more scientific place to live in. The Ministry of Science and Technology has played a key role in developing global S&T partnerships in critical areas including energy, water, health and astronomy.

Higher & Advanced Network and Water Research have been instituted by DST to support young faculty and research scholars for conducting quality research and build S&T partnership with scientists working in the Unites States of America. India through the Council of Scientific and Industrial Research (CSIR) has emerged as a technology centre for building global S&T partnerships in the area of energy specifically “Aviation Bio-Fuels”. Recently, a Memorandum of Understanding (MoU) has been signed between CSIR and M/s Pacific Industrial Development Corporation (PIDC) Inc., USA for production and supply of dimethyl ether (DME) catalyst. CSIR has recently signed another MoU with the National Institute of Environmental Health Sciences (NIEHS), NIH, USA to deal with environmental pollution and related health hazards. Further, an MoU has also been signed between CSIR and the Bill & Melinda Gates Foundation to support the development, conduct and promotion of health research in India.

India is participating in the construction of state-of-the-art astronomy facilities like Thirty Meter Telescope (TMT) in USA, Square Kilometer Array (SKA) in Australia and South Africa with S&T partnership with different countries across the globe. India is also establishing the 3rd Detector of Laser Interferometer Gravitational-wave Observatory (LIGO) in Maharashtra in association with USA.

The Government had brought out the Science, Technology & Innovation (STI) Policy 2013 with the guiding vision of an aspiring Indian STI enterprise to accelerate the pace of discovery and delivery of science-led solutions for faster, sustainable and inclusive growth. A plethora of programmes have been implemented by the Government to support and stimulate the S&T development in the country including S&T infrastructure. There has been notable rise in the S&T activities which helped India in improving its global ranking in certain key areas of STI.

A road map for promotion of S&T has been drawn by activating and initiating several schemes and programmes which focus on various measures like prioritizing critical R&D areas; promoting inter- disciplinary research including traditional knowledge; promoting the spread of scientific temper amongst all sections of society; supporting STI driven entrepreneurship with viable and scalable business models; creating an environment for enhanced private sector participation in R&D etc. CSIR has put in place a new R&D management strategy for planning and participative performance of R&D projects through formation of sector specific theme based clusters. The identified thrust areas include Aerospace, Electronics, Instrumentation & Strategic Sectors, Civil, Infrastructure & Engineering, Ecology, Environment, Earth & Ocean Sciences and Water; Energy and Energy Devices, Agri., Nutrition & Biotech, and Healthcare. The recent initiatives of DST in critical areas like Interdisciplinary Cyber Physical Systems, Quantum Information Science and Technology etc. demonstrate the commitment of the Government in bringing time-bound development in the country.

development in close collaboration with industries and start-up companies. Necessary S&T frameworks have been put in place to connect its scientific community with researchers from other countries like Australia, Brazil, Denmark, Egypt, Israel, Japan, Portugal, Korea, Norway, Russia, Serbia, Singapore, Slovenia, South Africa, the United Kingdom, the United States, and Vietnam to find solutions against COVID-19. Apart from bilateral cooperation, India is working with Brazil, Russia, China, and South Africa through the BRICS program. A joint call was launched covering the areas of diagnostics, vaccines and therapeutics, repurposing of drugs, intervention of artificial intelligence, high-performance computing for COVID-19 across multiple platforms ranging from disease surveillance to diagnosis. BRICS countries, which cover more than 25 percent of the world territory with more than 40 percent of the world population, would play a vital role against COVID-19.

India is one of the few countries in the world which has a promising pipeline of vaccine candidates of different platforms in various stages of clinical development. Under the Partnerships for Advancing Clinical Trials (PACT) initiative, Department of Biotechnology (DBT) partnered closely with the Ministry of External Affairs for strengthening clinical trial capacities in neighboring countries. 2 training series with >2400 participants across 20 sessions from 14 nations (Afghanistan, Bahrain, Bhutan, Gambia, Kenya, Maldives, Mauritius, Myanmar, Nepa, Oman, Somalia, Sri Lanka Vietnam and USA), have been held. As a global vaccine manufacturing hub, India has made available vaccines to the other nations. Current data from the Ministry of External Affairs indicate that till date, nearly 19.86 million doses of Made-in-India COVID-19 vaccines have been distributed globally through the COVAX facility.

There has also been a major effort towards indigenous diagnostic development. DBT supported indigenous manufacturing facility – Andhra Med Tech Zone (AMTZ), has enabled the achievement of self-reliance in the area of RT-PCR diagnostic kits for COVID-19, thus reducing import dependency. Further, more than 200 Indian Manufacturers have registered under National Biomedical Resource Indigenization Consortium (NBRIC), a ‘Make in India’ initiative for facilitating indigenous manufacturing of major molecular biology components/reagents. The Indian SARS-CoV-2 Genomic Consortium (INSACOG), an Inter-ministerial consortium of 28 Laboratories, has been launched, to ascertain the status of new variants of SARS-CoV-2 in the country.

These efforts, mentioned above, have positioned India on par with the globally developed nations in combating the pandemic. Intervention of Yoga and Meditation on mental health of students, healthcare workers and senior citizens during the pandemic and Yoga-based rehabilitation program for COVID-19 patients etc. are some of the unique engagements of India in comparison to other countries in tackling the pandemic.

Coal dispatch to power plants will be further increased