INVC NEWS
New Delhi,
The Meeting of the Organizing Committee for “International Buddha Poornima Diwas Celebration-2016” held under the chairmanship of Dr. Mahesh Sharma, Minister of State for Culture and Tourism (I/C) and Civil Aviation here today. Shri Kiren Rijiju, Minister of State for Home Affairs, Shri N K Sinha, Secretary, Ministry of Culture and distinguished members of the committee were present. Buddha Poornima or Vesak is recognized as the thrice sacred day that marks the birth, enlightenment and parinirvana of Lord Buddha. While Buddha was born in Lumbini in present day Nepal, he attained sambodhiprapti in Bodhgaya in Bihar. In Sarnath, he set in motion the wheel of the Dharma, and finally attained mahaparinirvana in Kushinagar. In order to celebrate these historic occasions that changed the religious and spiritual discourse of human civilization, it is important that Buddha Poornima is celebrated in befitting manner. It is therefore proposed to celebrate this auspicious occasion on a grand scale again on 21 May 2016. Not only will this help Buddha’s timeless teachings to further permeate the Indian consciousness, but will also reaffirm India’s historical status in the eyes of the world, especially the comity of Buddhist nations, as the land of origin of the Buddha Dharma – the land of Buddha’s sambodhiprapti, dharmachakra pravartana and his mahaparinirvana. It may be recalled that, speaking at the International Buddha Poornima Diwas Celebration last year in New Delhi, the Prime Minister, Shri Narendra Modi had declared that henceforth Buddha Poornima will occupy a prominent place in the Indian calendar as a National Celebration. To oversee the organization of these celebrations, an organizing Committee has been set up under the Chairmanship of the Minister of State for Culture and Tourism Dr. Mahesh Sharma, with the Minister of State for Home, Shri Kiren Rijiju and the Minister of State for HRD, Shri Upendra Kushwaha as Co-chairpersons. Ven. Lama Lobzang, Secretary General of the International Buddhist Confederation (IBC), a global umbrella Buddhist body headquartered in New Delhi will be Convener of the Organizing Community in India spanning various Buddhist traditions.
Read the full article
Tags: Secretary Minister of State for Home Affairs Ministry of Culture Dr. Mahesh Sharma Kiren Rijiju INVC NEWS New Delhi N.K.Sinha Minister of State for Culture and Tourism and Civil Aviation International Buddha Poornima Diwas Celebration-2016

The net zero targets are expected to be met through... 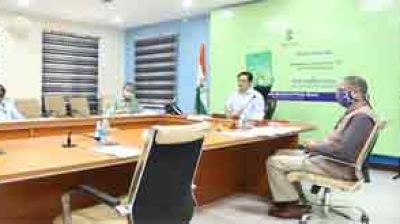