Meet the All New Fathers

There are very few equations that match up to the bond which a father shares with his children. It’s a relationship which is about unconditional love, humor and a special kind of friendship at its foundation. A show that touches upon these emotions is FATHERS that won hearts aplenty in the first season and this Diwali, it returns with the all new fathers – Rakesh Bedi, Manoj Joshi and Virendra Saxena in MX Exclusive Series “Fathers Vol.2”, a TVF Original.

This highly-anticipated second installment will have the audience roar with laughter, while these ‘cool dads’ try their hands on some of the latest trends such as playing PUBG, trying to make a viral video as well as binge-watching and chilling on the weekends. All 5 episodes will stream for free starting October 25 on TVFPlay and Mx Player.

Packed with some impeccable acting from the stellar cast, a flawless script written by Jatin Birajdar, Pratish Mehta and Harish Peddinti along with Prem Mistry’s exemplary direction, the show surely paves its way into the list of must-watch shows of 2019.

Commenting on the launch of his debut web series, veteran actor, Rakesh Bedi said “In today’s age, content is easily available to anyone at the very tip of their fingers. It is extremely important that one accepts the changes which take place around them. This is the age of web series and people really look forward to something which can take their minds off the reality for a while. FATHERS 2 is one such web series which is a combination of good writing, rib-tickling comedy and a fresh perspective. I hope people enjoy this show with the same amount of excitement we had while it was in the making”.

Commenting on the launch of FATHERS Vol.2, popular actor, Manoj Joshi said “Humor, emotions and something which is newly-harvested is what people look forward to in most web series. FATHERS Vol.2, in my opinion, is an amalgamation of all these qualities. The three of us along with the entire cast and crew of TVF have put in a lot of energy to make sure that the end product is something which the audience can cherish for a long time”.

Commenting on this occasion, veteran actor Virendra Saxena said, “A father is a very important figure in any person’s life. It is not an uncommon fact that children look up to their father for inspiration, but the lesser-known fact is that fathers too find inspiration and solace in their children. FATHERS Vol.2 portrays the story of relationship between almost all dads and their children wrapped in a coating of humour. I am confident that this is one such web series which every household can watch together, and I hope they do”
Read the full article
Tags: Virendra Saxena Manoj Joshi FATHERS 2 Rakesh Bedi 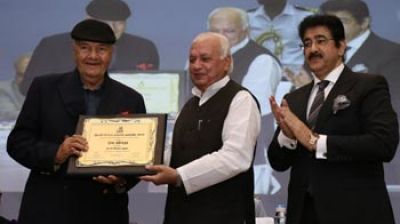