New Delhi , · The book elaborates and illustrates why human beings must earn as per their skills, which in turn determines their ability to contribute in society

Indian Politician and author, Manish Tewari launched "What Marx Left Unsaid" - Production of Skills by Means of Skills, authored by Dr. Malay Chaudhuri, Dr. Arindam Chaudhuri and Che Kabir Chaudhuri yesterday at a function at the India International Centre, New Delhi. While releasing the book Former I & B minister Manish Tewari began his speech with a phrase that summed up the morning- Marx in the times of Modi!! In an intellectually charged and appreciated speech he spoke of how some of the people who used Marx's philosophy line Stalin reminds him of the current times, and yet he believed that Marx was a humanist first and a philosopher later. Mr Tewari also said that the force of equality in the world- internet- must be also looked at with scepticism given that only five key firms run an oligopoly around it. Over all he said the need to bring in equality was a must but economic theories seem to be at loggerheads with religious and cultural ideologies forever. He ended by saying be it 2:1 or 3:1 or 4:1 , the world would definitely be a better place if the wage ratios came down to that. The book is on a theory of economic justice that creates a forceful case for an exploitation-free world with a maximum wage ratio of the Highest paid to Lowest paid worker at 3:1. It is presented to commemorate the 200th and 100th birth anniversaries of Karl Marx and ILO respectively. The book elaborates and illustrates why human beings must earn as per their skills, which in turn determines their ability to contribute in society. And skills, must be measured fairly. All that we need, to produce skills, are two things. First, the readiness to sacrifice unskilled labour - what any man is capable of giving. The second is a certain amount of skilled hours of a trainer. The book is special because it happens to be a rare one jointly written by three generations of authors from the same family. It has been published by Times Group Books. Dr Malay Chaudhuri, the founder Director of IIPM spoke about the importance of equality and why no human deserves to be paid more than three times another human being in a fair world. Dr. Arindam Chaudhuri elaborated through a passionate speech on how when education becomes free for all, human beings won't be able to command a higher price in the market than others because that essentially happens when we keep a majority of the people in the world uneducated and marginalized. Che Kabir Chaudhuri, the young joint author of the book credited with the basic mathematical equations in the book was precise when he said the theory is an internal part of his existence. Dr. J.K. Mitra, former Dean of FMS who also launched the book was precise when he said what Marx said is still being discovered and this book would only add to it.
Read the full article
Tags: Manish Tewari Dr. J.K. Mitra former Dean of FMS Dr Malay Chaudhuri What Marx Left Unsaid Dr. Arindam Chaudhuri and Che Kabir Chaudhuri Kabir Chaudhuri Malay Chaudhuri J K mItra Arindam Chaudhuri 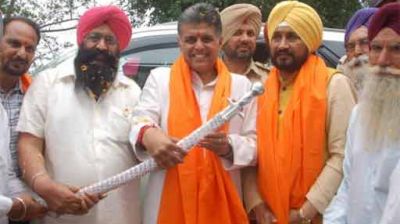 Government has Empowered People with new Tools of Information Dissemination...

The National Institute will cater the needs of the Youth...

The UPA Government at the Centre has enacted various people...