Home Other India last date for submission of application forms for Haj 2021 has been... 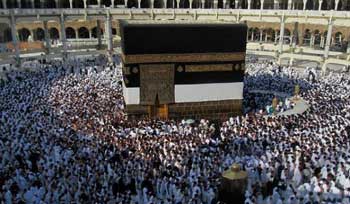 Union Minister for Minority Affairs Shri Mukhtar Abbas Naqvi has said that the last date for submission of application forms for Haj 2021 has been extended up to 10th January 2021. Embarkation Points-wise estimated cost per Haj pilgrim has also been reduced. Shri Naqvi was addressing a press conference after chairing a meeting of Haj Committee of India at Haj House, Mumbai, today.

Shri Naqvi said that today, that is, 10th December 2020 was supposed to be the last date for submission of application forms for Haj 2021 and now it has been extended up to 10th January 2021. More than 40,000 applications have been received for Haj 2021 till now, including more than 500 applications under women without “Mehram” category.

More than 2100 women had applied for Haj 2020 under ‘without “Mehram” (male companion)’ category. These women will go to Haj 2021 as the application filled by them for Haj 2020 is valid for Haj 2021 also. Besides, new forms are also being accepted from the women, who want to perform Haj 2021 without “Mehram”. All the women under “without Mehram” category will be exempted from the lottery system. The people are applying online, offline and through Haj Mobile App.

Shri Naqvi said that national-international Protocol Guidelines due to Pandemic Position will be implemented and followed strictly during the Haj 2021. Shri Naqvi said that Haj 2021 is scheduled for June-July 2021, and the entire Haj process is being held according to the necessary guidelines issued by the Saudi Arabia Government and the Government of India in view of Corona Pandemic to ensure health and well-being of the people in India and Saudi Arabia.

Shri Naqvi said that the Haj 2021 process has been chalked out after deliberations among the Union Ministries of Minority Affairs, Health, External Affairs, Civil Aviation; Haj Committee of India, Indian Embassy in Saudi Arabia and India’s Consul General in Jeddah and other agencies keeping in view all aspects of the pandemic challenges.

Shri Naqvi said that the arrangements for Haj 2021 have been made under special circumstances with special norms, rules and regulations, eligibility criteria, age restrictions, health and fitness requirements and other relevant conditions of the Saudi Arabia Government amid the Corona pandemic. The entire Haj travel process has been done with significant changes in view of the pandemic. These include accommodation, period of stay of pilgrims, transportation, health and other facilities both in India and Saudi Arabia. All the necessary guidelines for Haj 2021 amid Pandemic position from the Saudi Arabia Government will be implemented strictly. There may be changes in age criteria for performing Haj due to the Corona pandemic. Each pilgrim will have to undergo Corona test 72 hours before Haj journey as per prevailing international air travel protocol. Each pilgrim will have to submit a PCR test certificate issued by approved laboratory with a negative result before journey to Saudi Arabia.

Senior officials of Union Ministry of Minority Affairs; Haj Committee of India CEO Shri M. A. Khan and other officials were present in the meeting today.

The country has adequate facilities and resources to tackle Corona challenges

India is the world’s largest centre of spiritual-religious knowledge

Talibani mentality on women’s liberty, dignity, empowerment and constitutional equality will not be tolerated

The 34th edition of “Hunar Haat”, being organised at Vanita Vishram, Surat from today